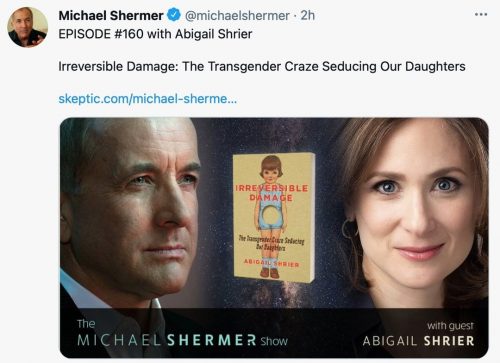 Skip it. Irreversible Damage is simply more right-wing hysteria. The premise is that the transeses are transing our kids against their will — the usual moral panic we saw about the gayses recruiting kids with their flamboyant, ever-so-appealing gayness. It’s a garbage book by someone who writes for the Federalist and other such reactionary venues. I’m not going to watch it, but I’m pretty sure Shermer won’t be doing a critical, or dare I say it, skeptical interview.

If you don’t want to watch a video, here’s a solid critical review of Shrier’s book. It’s published by Regnery? Yuck. She didn’t interview any of the kids she describes, but rather talked to their parents, who are very upset that their kids were transgender? Jesus.