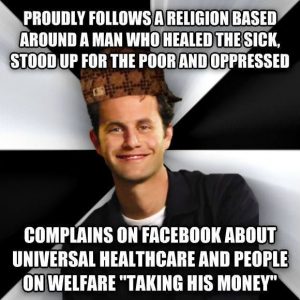 Isaac Bailey is not an atheist, but he makes the atheist case strongly.

I’m struggling to hold fast to my Christianity— because of Donald Trump. Not exactly Trump himself, though, but the undying support of the self-professed Christian pro-life movement that he enjoyed. My faith is in tatters because of that alliance. And I am constantly wondering if I am indirectly complicit because I dedicated my life to the same Jesus the insurrectionists prayed to in the Capitol building after ransacking it and promising to kill those who didn’t do their bidding.

If Christianity can convince so many to follow a man like Trump almost worshipfully—or couldn’t at least help millions discern the unique threat Trump represented—what good is it really?

Yeah? What took you so long, Mr Bailey? This isn’t a problem that suddenly appeared years ago — it’s been a property of the American political establishment since day one. It’s gotten worse in relatively recent years, since at least the 1950s, when the evangelical Christian movement was sinking their claws into our government, making lip service to Christianity a prerequisite for running for office. Where were you in the Reagan years, when cloaking oneself in piety and patriotism while practicing the politics of greed became de rigeur? This behavior flares up regularly in American history, where Christianity surges up and wrecks the country. How can you miss the corrupting influence of religion, and the hypocrisy of its most vocal advocates?

He seems to have been caught up in the most successful propaganda campaign American Christianity has waged: the “pro-life” movement, in which we get people worked up over a medical procedure and tell them it’s baby murder. It’s not, of course, but it has become such a deeply ingrained dogma that embryos are people from the instant of conception that you’ll never talk them out of it, and that lie is the wedge they hammer in to tell you that you have to vote Republican or you’re a baby-killer. But Mr Bailey is finally starting to see through it.

Trump oversaw a 200% increase in civilian deaths in Iraq and Syria during his first year in office. He presided over more than 460,000 COVID-19 deaths, far outpacing any other industrialized country. He repeatedly demonized a group of men, women and children seeking refuge in this country from the violence and uncertainty they faced in their own. A man picked up an AR-15-style assault rifle and committed a massacre in the Tree of Life Synagogue in Pittsburgh after becoming convinced Jews were responsible for the despised caravan of vulnerable brown people. He murdered 11 people; how could Christians have supported the man whose conspiracy theory he quoted?

The body count didn’t end there, though. Trump incited an insurrection that resulted in at least five deaths, dozens of injuries and a stain on America’s reputation so severe it will be harder to get other countries to take us seriously when we demand that they honor life and not commit human rights abuses. Aided by “pro-life” Supreme Court justices, Trump was able to fast-track 13 federal executions during the final months of his presidency, the most by any president in more than a century. Even the abortion rate slightly increased in the middle of Trump’s term, a reversal from major declines during Barack Obama’s two terms in office.

If you can’t quite see yourself leaving Christianity fully (I did, it felt good and honest), at least let’s recognize that politicians claiming holy moral authority are all lying and that they are the last people you ought to elect to office.