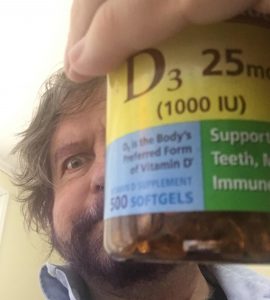 Hey! Attention, consumers! I need to give you Important Informations!

I used to be like you, tired, worn out, full of aches and pains. It used to be a regular feature of my life that one joint or the other would flare up and start misbehaving. I’d injure myself rolling over in bed. I’d plan my summers around my annual knee eruption, which I could do nothing about but suffer. I’d think, well, this is just life, this is what getting old feels like, it’s just going to get worse and worse until one day I shatter my spine by breathing, and then it’ll be over.

Last spring, though, I had a routine check up with my doctor, and he mentioned casually that, you know, a lot of Minnesotans, we of the Northern climes, have vitamin D deficiencies — the vitamin you can synthesize with sunlight — because while we do have plenty of sunshine, we tend to huddle indoors all winter long to avoid freezing to death, and some of us have jobs that are performed under fluorescent lights even in the summer. I think he may have noticed my pasty-pale complexion and had reason to suspect I was one of those subterranean creatures who shun the light and live like mushrooms.

So I’ve been taking vitamin D supplements every day, and I just want to say…I think it worked. This has been my most pain-free summer in years, and I haven’t had a single knee or ankle or other random joint explode on me even once! It’s a miracle!

Anyway, just drop my name or use promo code…oh, wait, I don’t have a promotional deal with Big Vitamin, so never mind. These things are fairly cheap and seem to have made a big difference for me*.

It’s also given me exuberant hair growth and a minor derangement of some sort, but that’s a small price to pay.

*Possible confounding variable: I did a lot of summer research outdoors, so a fair bit of walking and far more sun than usual. That might have helped.

OK, also, major dietary change. My wife and I have thoroughly embraced the Mediterranean diet, so a bit of keto (but not over the top), lots of fish and olive oil and green vegetables and eggs. Possible slight contribution there.

Yeah, and I’ve lost 25 pounds or so since March. No way that could have done anything, right?

Oh, and I’ve been avoiding filthy, disease-ridden humans for half a year. Nah, that couldn’t possibly have any health effects.

It’s the little bottle of vitamins, yeah, that’s the ticket! But seriously, it wouldn’t surprise me if I’d been running a vitamin D deficiency for several years, so it’s probably a good idea to have corrected that.