Today’s adventure in spidering was a trip to SWELL, the Scandia Woods Environmental Learning Lab. It’s a lovely place. I hated it.

There is a lake there. The lake has a thick marshy boundary, and outside that, a path through thick woods leading to a classroom that, in normal times, is used for school children’s field trips. It is lush and damp and overgrown, and you know what that means, boys and girls? In Minnesota? Yes, it means that the actual purpose of this site is to lure in delicate tasty young children so that their blood may feed the Mosquito Gods. If an old guy wanders in, well, all the better — a nice snack.

I had sprayed myself thoroughly with picaridin before we left. For some strange reason, perhaps the possession of arcane foreknowledge, the head of the trail had a mailbox containing a supply of Deep Woods Off. And a hammer. The hammer was a mystery for a short while. As we walked down the trail, the mosquitoes descended upon us. I had hosed myself with so much insect repellant that my skin was layered with a shiny sheen (which is even now drying to a lacey craquelure.) It did me no good. Apparently I was supposed to use the hammer. Part of the problem was that there many spiders, mostly tiny unfortunately, and I was frequently stopping and trying to photograph the things, and that was the signal for a pack of voracious beasts to charge in whining.

Also aggravating: Mary had no problems at all. I guess we know which of us is the succulent, luscious one now! Or was. I’m kind of dessicated after that experience.

OK, I do think I got one decent photo out of that hazardous trip, especially considering how I was being eaten alive while shooting it. 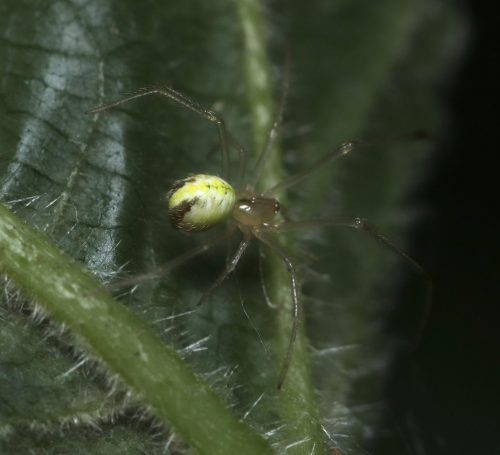