It’s been almost a month since George Floyd was murdered, and protests erupted across the country (and the world) very shortly after, so there’s been time enough for the coronavirus to piggy-back on the crowds and cause a surge in infection rates. But look at these plots, especially for Hennepin county! 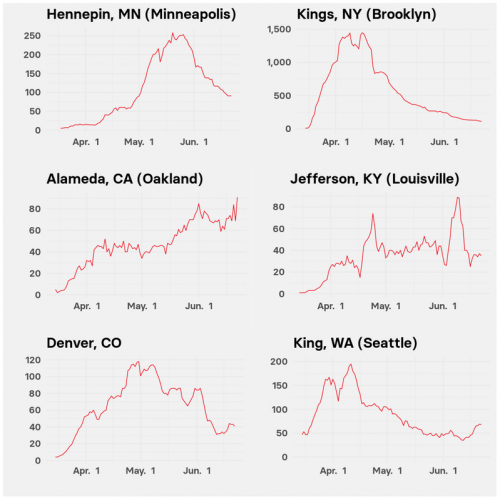 That’s good news, but it’s a little confusing. Why aren’t those big crowds perfect petri dishes for the pandemic?

What’s more, a new analysis based on cell-phone tracking data suggests a surprising reason for the lack of protest-related spikes in COVID-19: In the cities with large protests, the wider population actually spent more time at home during the demonstrations — suggesting that any surge caused by virus transmission at the protests themselves would have been countered by an increase in social distancing among the rest of the cities’ populations.

While experts consulted by BuzzFeed News agreed that wearing masks and being outside may have reduced the risk of viral transmission at the protests, they pointed to other possible factors as well. Many of the protesters were young, for example, meaning that new infections that occurred while they were demonstrating would be less likely to cause severe disease and show up in official case counts. And even though hundreds of thousands participated in the protests, that’s still a relatively small number compared to the total population of the cities involved — so it might be hard to notice transmission of the coronavirus at the protests.

“The fact is that we will just never know for sure, because there’s too many moving parts,” Andrew Noymer, an epidemiologist at the University of California, Irvine, told BuzzFeed News.

Epidemiology is hard — too many variables, too many moving parts. This suggests, however, that you shouldn’t expect dramatic surges from the recent Republican rally, for the same reasons: small crowds relative to the greater population. That participants were generally older might have more effect, though, and BLM protest participants seem to be a lot more careful about using masks and distancing..

What’s worrying is that the article also shows recent rapid rises in states like Texas, Oklahoma, Florida, and South Carolina, and the country overall. That’s associated with states that have been generally opening up, and reducing mask and social distancing expectations. The lesson: general policy is far more influential than limited events. Republican governors are greater threats to public health than grassroots protests.