Look, I don’t hate physicists — I have friends who are physicists! They can use my bathroom any time! It’s more that there a few rotten apples who insist on ignorantly stepping into my discipline and making grand (and false) pronouncements about how biology works, apparently because knowing physics makes them think they know everything. And it’s annoying, especially when they get grant money for it (e.g., Paul Davies), publish rubbish in physics journals without question, and get fawned over by the mass media for it. I’ve also noticed that there’s a kind of thin actinic line of other physicists who reflexively rally to the defense of any of their own, no matter how inane, against interlopers from outside the domain of physics — which is kind of hard to imagine, since they simultaneously believe that everything is in their domain.

I have to snipe again, though, because another physicist is in the news. Students and others are calling for the removal of Stephen Hsu as VP of Research and Graduate Studies at Michigan State University.

Some physicists think that because they know physics, and physics is difficult, that they are qualified to work in other disciplines. Sometimes a physicist wandering from physics turns out fine, particularly if they make use of their obvious quantitative skill; I’m thinking here of David Layzer’s well-known critique of Arthur Jensen’s IQ work. Other times it is disastrous, such as William Shockley’s eugenic proposals. Yesterday evening the Graduate Employees Union (GEU) of my own university, Michigan State University, posted a long Twitter thread that shows that the Senior Vice-President for Research and Innovation, Professor of Theoretical Physics, Stephen Hsu, here at my own university, Michigan State University is much closer to Shockley than he is to Layzer.

I’ve written before in this space on how scientific racism gains purchase when supposedly mainstream sources publish and promote it. I find the evidence in the GEU Twitter thread to be good examples of Hsu promoting outrageous figures by appearing with them on podcasts and Youtube videos, such as that of the loathsome Stephan Molyneux.

Hsu shares a conceit all too common among physicists: that “it’s really high math ability that is useful for discovering things about the world — that is, discovering truth or reasoning rigorously.” But his behavior shows that this is manifestly untrue. All the quantitative sophistication in the world does not help in disciplines that require interpreting texts in historical contexts, understanding social nuance, or properly recounting the past for present-day audiences. Add in a heaping dose of conspiracy arguments and you can quickly end up promoting racist, especially antisemitic interpretations of history. This is what happened when Hsu interviewed his friend Ron Unz last year. The Senior Vice-President for Research and Innovation at my University heaped praise on a promoter of Holocaust denial on his podcast; clear evidence of Hsu’s complete lack of scholarly and intellectual judgement.

This isn’t some harmless academic argument, like how many aliens are dancing on the planets of the galaxy, but the promotion of bad ideas that do great harm to people. Hsu consorts with racists like Stephen Molyneux and Ron Unz; he openly promotes eugenics; he holds ridiculous ideas about the unlimited perfectability of human genetics, despite being pig-ignorant of biology; he believes women are inherently less suited to careers in science and engineering. His views are rejected by the American Society of Human Genetics, but I guess his authority in theoretical physics overrides that. The real shocker here is that MSU was willing to promote a blatant, unapologetic bigot with ties to racist, white nationalist organizations to a prestigious position in their administration. I guess believing in the intrinsic inferiority of minority students is no obstacle to putting the guy in a position of power at a university.

I tangled with Hsu a few years ago, ripping into his belief that we can breed people for an IQ of 1000, as if IQ is a real entity and breeding people is like breeding chickens. Remember the chickens, the mainstay of his argument? 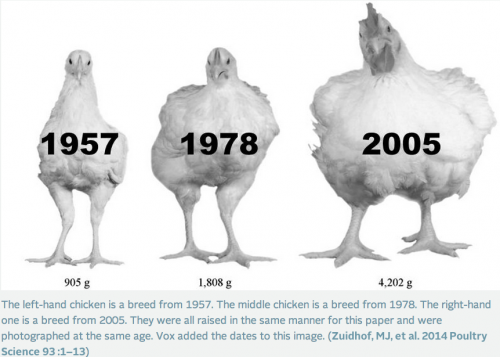 That fat chicken is your brain. Let the dumbass physicist control your breeding, culling the less brilliant progeny from your line, and eventually your many-times-great-grandchildren will have great huge brains and be many times smarter than Stephen Hsu, and nah, there won’t be any side effects and we’ll just ignore the inhumanity of the process and we’ll pretend there aren’t any physical limitations. All you have to do is imagine an immense perfectly spherical brain floating in a frictionless vacuum.

A baffling philosophical question » « How do physicists get away with publishing this crap?