I got word from a colleague* that their compost bin was accumulating spiders again — they had a swarm of them last spring, that disappeared over winter — so I had to check it out. I opened the bin and was disappointed at first, because while I saw lots of cobwebs all over the decaying vegetable matter, there was nowhere near the number of spiders I’d seen in the spring. 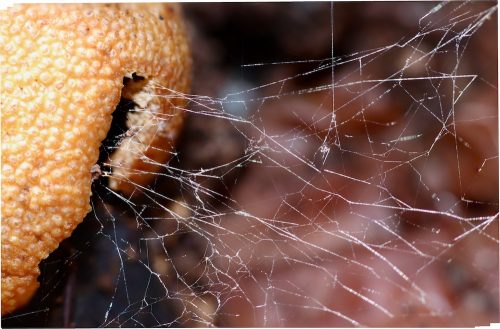 I finally spotted one in a corner. Steatoda borealis, the same species that had thoroughly colonized the bin before.

Steatoda borealis is an interesting theridiidid. They seem to be the native species to this area, with the more common house spiders being immigrants from either Eurasia or South America, depending on the species. These beasts are bigger than the others, and I haven’t seen them in houses or garages much, mainly outdoors or in special environments like this compost bin. I’ve got some in the lab, and they seem less active than Parasteatoda or Steatoda triangulosa, but that may be because I’ve only observed them in the day.

I spent several moments poking around in the bin, taking a bunch of photos, making a note to myself to come back in a week or two. Then I started to lower the lid. The lid I’d been holding up all this time with my left hand. Only then did I notice that it was covered in webbing, and there were all the spiders, lots of them, gettin’ busy busy beneath my oblivious fingertips. Squeee! Jackpot!

So I had to take a bunch more photos. These spiders were paired off all over the place, mating furiously! I took photos of these wonderful piles of tangled legs, 16 at a time with agitated bodies having a grand time.

You’ve probably heard about female spiders killing their mates and eating them, but that doesn’t happen so much in environments rich in food. Steatoda and Parasteatoda can happily coexist in sprawling web communities where lots of insect life is rising up from a festering mass, and they don’t do the cannibalism thing in those circumstances.

I did notice one lonely male off to the side of a mating pair, staring intensely. I hope you find your true love soon, little guy!

*A colleague in math. Curious fact: two of the professors in our math discipline have the most interesting spider populations in their yards. Is it something about mathematicians that attracts spiders?

How to explain to someone that they’re wrong? » « The NYTimes is just Fox News in a slightly less shiny suit