Why? What the fuck is wrong with the NY Times? (I know, I seem to have spent the last couple of decades asking that question, but I still haven’t had a good answer.) 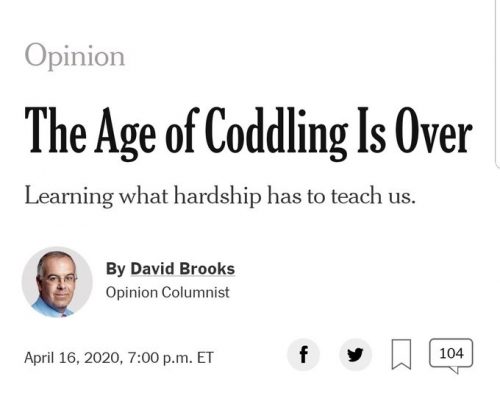 Fortunately, Driftglass reads him, so I don’t have to.

Mr. Brooks was raised in academic privilege, loitered at the University of Chicago long enough to score a BA in history (which, based on how routinely he molests and whitewashes the past in order to advance his political agenda, should have been revoked decades ago) after which he latched onto the wingnut welfare teat like a lamprey and has been nursing at its ample bosom ever since. Brooks is America’s most ubiquitous cheerleader for the myopically wealthy, the cluelessly privileged and politically inbred and has made his a career out of telling the rich and powerful the silky lies they desperately wish to be true.

Yes truly it can be said (and has been said, once or twice) that in all this wide, bountiful, fatally-conflicted nation — from the mountains to the prairies and the whole rest of that song — there is no one who can speak with less forged-in-the-crucible-of-hardship authority about what hard times have to teach us than David Fucking Brooks.

I haven’t read the column, and I don’t plan to, so I don’t have direct observations to determine the accuracy of this summary, but I’ve read enough David F. Brooks to assume that the gist is correct.

First, I’m sorry Brooks’ kids no longer speak to him because he dumped their mother for an intern, and passive-aggressively lashing out at them via the op-ed page of The New York Times is the only way Brooks’ knows how send them a message, but honestly, that sounds like a “David Brooks” problem, and not a “the rest of us” problem.

Second, this is every bit the Brooks-brand wretchedly oblivious moral hectoring that you imagine it to be.

And third, in the interest of self-care during these dark times, you shouldn’t read it. After all, that’s my job.

I repeat, why does the NY Times still shovel money at that worthless blot of privileged rancidness? Driftglass would do a better job, and he’d probably work for less while deserving more.

We’re always buried in books & papers, why are you complaining now? » « Mission accomplished