I’ve been getting worried about the spider colony lately — I saw a phenomenon last year that I’m seeing again, where elderly female spiders begin hoarding the carcasses of their prey, and building thick, tangled webs that they hunker down in and don’t move. They wrap up all these dead flies into a mass and also scrabble up random debris to make a nest (the latter is probably normal) and they cease being productive. I also see the production of dead egg collections, often without even bothering to build an egg sac. Here’s an example: 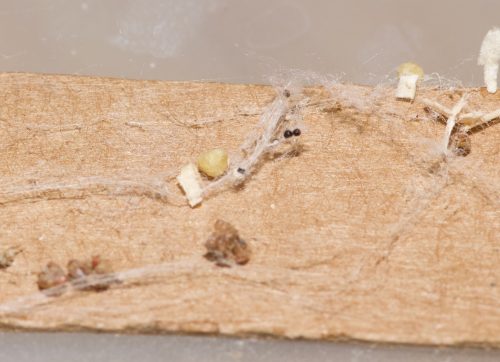 Yuck. Filthy. You might spot the yellowish egg clumps at the top right and near the center. I’ve never seen this in the wild — usually the webs are regularly purged of dead prey — and it could be that this is a normal consequence of aging (senile spiders!) or I could have cause and effect reversed…maybe it’s the accumulation of filth that makes for unhappy spiders. I should just clean up the cage and see if it makes them happy and ‘normal’ again!

One problem with that is that inside those nice sterilite cages, I have simple cardboard frames for them to build a web on that are made by cutting up cases of soda pop minicans. 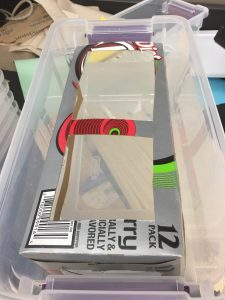 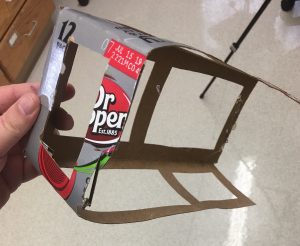 Convenient. Cheap. Disposable. Except that to get them, I have to buy 10 minicans of soda pop, and I don’t drink pop anymore. I could just throw the filthy frame out, cut up some more cardboard, and put the female in a new, clean home and see how it goes. But, you know, I have two dozen cages, and that’s a lot of minicans. It’s also cheap cardboard, so it’s not exactly washable and reusable.

So I started a little crafting project, to build simple reusable frames from inexpensive materials. To start, I bought a bunch of foot-long 1/4″ wooden dowels and bamboo strips, and cut them down to an appropriate size with a small saw and stuck them together with hot glue. This is a classic popsicle stick and hot glue kind of project. 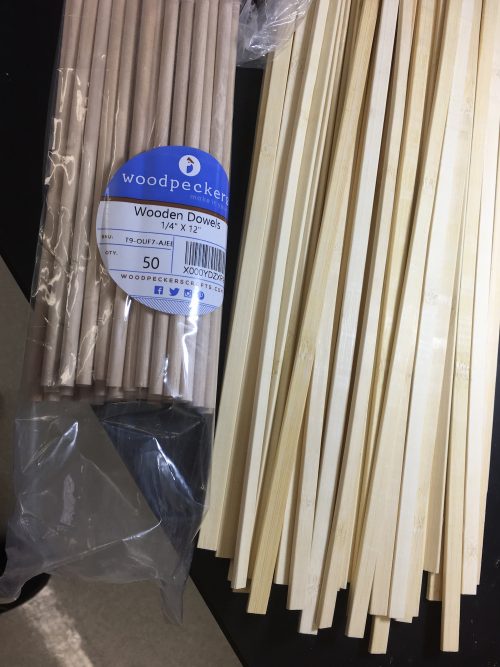 The end result is a slender but reasonably sturdy frame that fits perfectly in my cages. 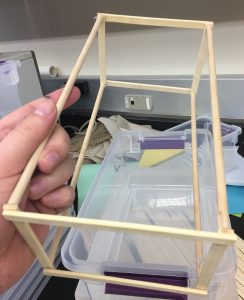 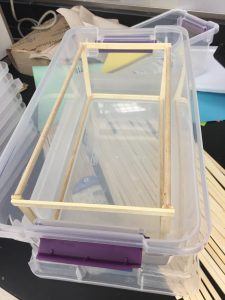 If it gets dirty (it will), I can just wipe it down with a damp cloth. It’s also lighter and the frame is more delicate, obscuring spider observation less. The only question is, will the spiders like it?

To test that, I put one of my spiders who is particularly far gone in corpse-hoarding/bad egg laying syndrome, and put her in this nice, classy softwood home with simple Scandinavian styling, and an absence of garish soda pop advertising. 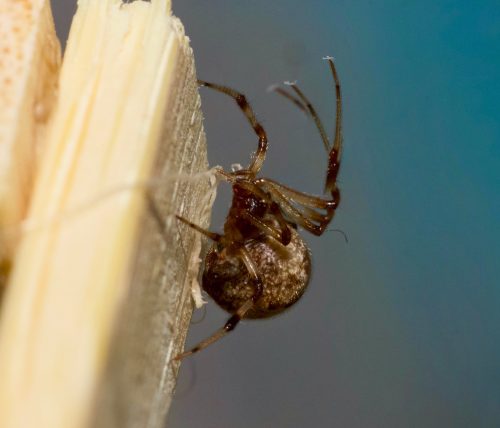 She liked it! She immediately circumnavigated the frame and started laying down a new web. I have high hopes that Mrs Yara will be revitalized by her new clean surroundings. If all is well tomorrow, I’ll start transferring the whole colony to new digs.

She has already picked out a corner for her new home/nest! 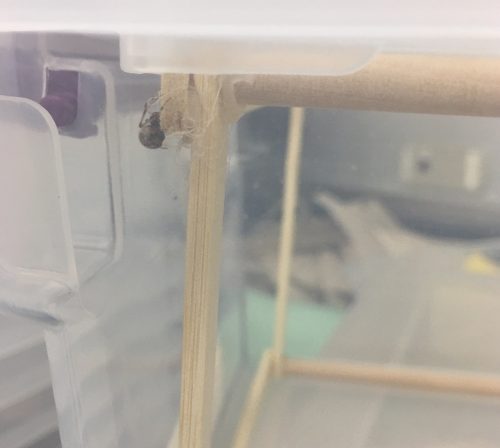 Our cars provide a glimpse into the American psyche » « Happy Birthday, Mr Darwin!