My third letter is standard Christian evangelism. It’s a bit nicer than the other two, I think, but still is loaded with oblivious assumptions. 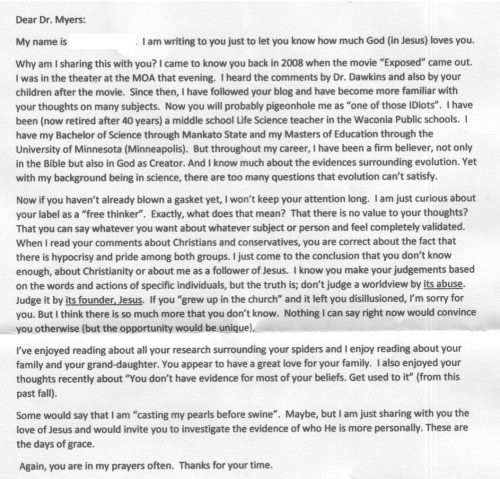 I hope my correspondent was professional in their educational career, and wasn’t trying to persuade their students to accept non-scientific ideas in the classroom, but the use of the Christian tell “evidences” is a little worrisome.

But to answer their questions:

A freethinker is someone who rejects dogma, especially the religious kind. Freethinkers can be theists, but they will not accept the dogma of any particular religion. I’m not that kind of freethinker: I reject all religion totally, and also don’t accept many cultural shibboleths.

It does not imply an absence of value. It says that I’m going to think freely about what values I’ll believe in.

I know enough about Christianity to see that there are a great many flavors of faith, and I’m not interested in any of them. I went to church regularly as a child, but I was not disillusioned — I grew up and learned to see through the pretense of false claims and historical failure. I do not accept the authority of this Jesus guy, who seems to be a figure painted over with 2000 years of ever-changing claims and beliefs, and also seems to be an empty figurehead that modern Christians fill in with bad ideas and discredited nonsense. I do not believe that my correspondent has any better knowledge of the True Jesus™ than I do, or than Jerry Falwell Jr. has.

I’m an atheist. I didn’t arrive at that conclusion because I was preached at by Madalyn Murray O’Hair or Richard Dawkins. I have already investigated thoroughly; my first dates with my wife-to-be involved going to different churches to see what they’re like. We concluded that there were a lot of nice folks out there, going to church, but that there was nothing convincing about any of their doctrines (if we had decided our faith on the basis of how nice the people going there were, we’d be either Buddhist or Russian Orthodox today, but that’s not how we made up our minds). I’m also not going to be persuaded by a nice letter from a Christian.

And thus endeth my three letters of Christmas.