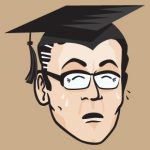 This is the last week of the semester, and I have been buried in grading, nonstop. Term papers were due this week, lab reports, a quiz, etc., and they all have to be done by Thursday to clear the decks for finals next week. That doesn’t make me cry; it’s in the syllabus. This final surge of work for me was planned.

Here’s what kills me.

One third of the cell biology lab grade comes from a big final lab report, describing an independent project they’ve been working on for the past month. I spelled out for them that 75% of the grade on that report is based entirely on reproducing the structure of a formal scientific paper. You know the drill: an introduction that explains why you’re doing the experiment; a methods section that describes how you did the experiment; a results section that describes what you observed; a discussion that interprets your result; and a few other little things, like an abstract and proper citations, etc. I told them that 75 points come literally from just following the form, before I would even dig into the content of their work. (This is a sophomore class, with students who may not have even read a scientific paper, let alone written one, before this year, and simply mastering the structure of the scientific literature is a goal.)

I’ve gone over all this in class. I’ve given them a big ol’ handout I wrote, titled “How to write a scientific paper”, that spells out that structure. I gave them a talk on the subject.

One of the things I told them is that a paper is a text narrative with a formal structure, and every section of the paper is a tightly focused short essay, with rules. Your intro references prior literature in the field, here’s how to write a citation. Your methods are detailed enough that another student could replicate what you did in the lab. The results section includes your data, which may be in the form of tables, graphs, and illustrations, but it also must be a text narrative that summarizes that data and references any figures you use.

I emphasize that bit. I tell them that every year, some students will turn in a lab report that has a results section that is just a jumble of figures after the word “Results”, and that without an in-text reference those figures don’t exist as far as I’m concerned, and without any kind of narrative, they have basically turned in a major section of the paper as a blank, and they get zero points.

There is a section of my write-up on how to write a paper that specifies common problems. This is the very first one.

Missing results. I say it over and over again, but still students turn in a results section that is a jumble of figures and tables and contains no coherent narrative. Write a story about the results! Tell me what you saw, don’t make me try to extract it from a pile of data.

I pound the white board. I tell them “DON’T DO THIS”.

They turn in their lab reports. Most are fine. But again, there’s a group that turn in an empty results section, just a hodge-podge of disconnected charts.

I give them so many opportunities. The week before it’s due, I set aside every day from 9-1 for office hours; I tell them, “Please stop by with your rough draft, I’m happy to look it over.” Some do. I caught one report with the cursed empty results section last week, and I was overjoyed to explain to them what they needed to do to fix it, and they did! Their lab report this week was lovely. Lots don’t. I spent many lonely hours in my office, away from my spiders, but at least I got some grading done then.

I even tell them that while it’s due at the end of the lab period this week, I am willing to look it over at the beginning of the lab period for any egregious problems, and they could patch it up and reprint it for submission. Curious fact: it’s the students who are fairly confident of their work who ask me to check it over. The ones who assembled it at the last minute don’t bother. Really, I don’t judge at that point! I just want them to get it right and do well.

Later, I judge. Unfortunately, I tend to judge myself more, and a little tear trickles from the corner of my eye.

This is student evaluation week. Also predictable — students will complain that I didn’t explain this essential component of their lab grade well enough, that I wasn’t available in my office when they needed help, that they didn’t get any guidance from me.

At least at this point there are no more tears, my heart just hardens a little more.

Next year…what do you think will work better? Getting down on my knees and begging, or breathing fire and rage, to get that one little point across? I would love to see one year before I retire in which every student pays attention to this one simple requirement.