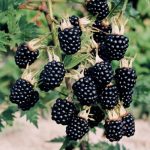 Growing up south of Seattle, one of the omnipresent features were the blackberries — everywhere I walked, along the roads, in abandoned fields, along the railroad tracks, there were these impenetrable walls of blackberry brambles. They were a nuisance, but it was great in August because it was like all the paths were lined with candy, you could just pluck huge quantities of fat berries while hardly trying.

But today I read about the history of blackberries in that area, and it starts out disappointing — they’re non-native, introduced by Luther Burbank — but it just keeps getting more OH NO LUTHER YOU DIDN’T.

He started selling a new book that he’d written in his catalogs, The Training of the Human Plant.

Burbank wrote that the crossing, elimination and refining of human strains would result in “an ultimate product that should be the finest race ever known.”

He considered the U.S. the perfect place to practice eugenics, because, at the turn of the century, there were immigrants coming from all over the world. He wrote:

“Look at the material on which to draw. Here is the North, powerful, virile, aggressive, blended with the luxurious, ease-loving, more impetuous South.

“The union of great native mental strength, developed or undeveloped, with bodily vigor, but with inferior mind.”