Winter is a tough time to be an arachnophile, especially in the Great White North. It’s even tougher to be a spider. They’re mostly gone from outdoors — I’ve been looking, and everything is frozen and windy, the bugs are all dead, and it’s no place for an arachnid.

They do have some places to thrive, though: in your house. We people at least provide refugia for a few species, like the theridiidids I’ve been following. My wife, who has the eyes of an eagle, found this tiny little guy in our kitchen and scooped him up. He’s a juvenile so it’s hard to tell, but the palps look swollen and he’ll probably be ready to mate after his next molt.

The photo isn’t the best. A) he’s very smol, b) I’m shooting through plastic, c) he’s dangling on a single slender thread spanning the tube, and is practically vibrating, and d) he’s very excited because I fed him a fly, and he’s fangs-deep in that juicy fresh beast. 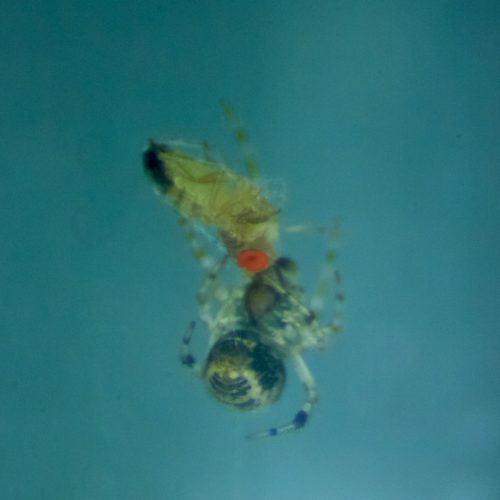 He’s Parasteatoda, and has a spectacularly stark pattern of angular pigments on his abdomen (not adequately shown). Once he has settled down and is nestled in a comfortable web — it takes a few days for them to build a cozy nest — I’ll have to get some better shots.

At least when people ask where spiders go in the winter, I have an answer. They go to my house.

Gahan Wilson is dead » « A few rules for living