I know what you’re all saying: I haven’t been posting as many spider photos lately. Guilty as charged. In my defense, classes have started up, and I’m busier, and I’ve already got grading to do, and I’ve got all these students, and…

OK, you don’t want to hear about it. So this morning I fed a few of the spiders and tried to get some action shots.

It wasn’t easy. They’ve all got their dark cobwebby corners where they’d rather hang out quietly, so I’d toss them a fly, whip up my camera, and take a picture of them reacting. Usually, that meant they’d dart out, quickly wrap the fly and bite it once, and then dart back into the shadows, and I’m not that fast. Here, though, I tempted Gilly with the most delicious prey, a very young fly just emerged from the pupal case, still pale and soft, and managed to snap a few quick ones before she retreated and after she’d seized it.

Here you can see how she uses her hindlegs to draw out some webbing and wrap it around her prey. She’s like a killer loom. 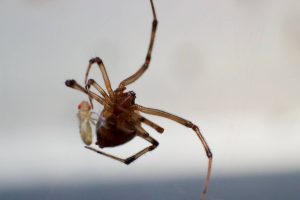 A little pathos…I focused on the poor damned fly, having just left its pupal case to find itself imprisoned again and facing envenomation and death. 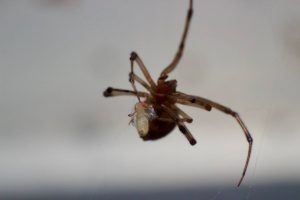 Spider science is grim and gothic. I’m liking it.

Disgusting » « Everyone must say “Happy Birthday!” to Mary