Gosh. Marianne Williamson replied to me and Orac on Twitter, to chide us for not reading her books.

Have you actually read any of my books, Sir? Or are you – contrary to what I assume is your firmly belief in your own intellectual perspicacity – simply presuming you know what they say?

It’s true. I haven’t read a whole book by Williamson, only excerpts, and they were enough to convince me she’s not a good candidate, despite her earnest, emotional appeal. Here, for example, is a Twitter thread full of specific examples from her books. They’re appalling. 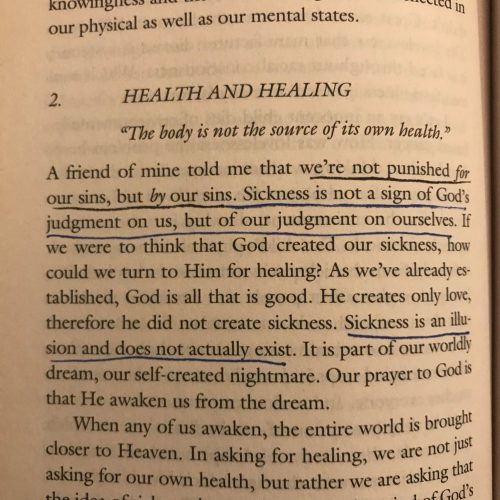 Sickness is not a sign of God’s judgment on us, but of our judgment on ourselves. If we were to think God created our sickness, how could we turn to Him for healing? That kind of baseless drivel is not worth reading in greater detail.

Or you could read Lindsay Beyerstein, who did that old-fashioned thing journalists used to do of deeply researching the history and philosophy of Williamson’s beliefs. It’s all very Christian Sciencey, and its roots can be traced back to Christian Science BS.

According to Williamson, not only is the real world an illusion, everything is an illusion, except love. God is love. We only think that we are separate from each other and separate from God – in reality, we are all one. All of our problems, including sickness, are illusory. If we could just get beyond the illusion of sickness, we wouldn’t be sick.

If sickness is all in our mind and our minds can be changed by miracles, you might assume that miracles can cure disease. “Sometimes a miracle is a change in material conditions, such as physical healing,” Williamson writes in “A Return to Love.” “At other times, it is a psychological or emotional change.” This is the bait-and-switch at the heart of Williamson’s teachings. Maybe you’ll get well, or maybe you’ll feel better about being sick, but either way, she’ll get your money.

It’s all your fault, you know. Everything. If only you’d love God, you’d be better.

At times, Williamson sounds very victim-blamey. She claims that over-identification with the physical body at the expense of the spirit places a “stress on the body that the body was not meant to carry – and that’s where sickness comes from.”

When asked whether people get cancer because of bad thoughts, Williamson is quick to say that it’s not necessarily because of their own bad thoughts. Maybe a child got cancer because of someone else’s bad thoughts, she suggests, in “A Return to Love,” arguing that perhaps some evil chemical company executive’s bad thoughts led him to poison the water supply. But that argument conflicts with her theology’s core contention: If the child’s cancer is real (and not just an illusion) and the poisoned water is the real cause, then her claim that only love is real can’t be true. Never mind that it was the chemical executive’s actions that caused the pollution, not his thoughts. Williamson claims that “disease is loveless thinking materialized,” noting that lovelessness can be collective, like racism, which does indeed harm people’s health and shorten their lives. But this doesn’t explain how children are born with diseases that have no environmental or social cause, such as cystic fibrosis.

She has a lot of excuses and is quick with denial, but she can only do that because her beliefs are so nebulous and flexible…but ultimately, they rely on the Christian notion that you are a sinner and you deserve every affliction you get.

Nope, not voting for her ever.

Yesterday is a good movie! » « Doom befalls the University of Alaska