Not that it will cost his reputation in the skeptic community anything — he is the master of falling upwards. But recently he has been saying really stupid things on Twitter to defend the alt-right, including this bizarre declaration: 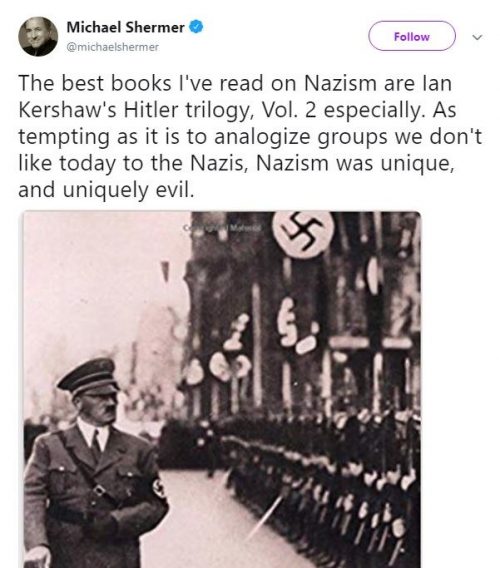 Yeah, right. As we’re seeing in the American concentration camps today, German Nazis didn’t have a monopoly on evil. Ordinary, not-very-bright American Trumpkins are doing a phenomenal job of imitating them right now. Shermer had even more to say, though, including this astonishing canard: Good to remember that Nazi=National Socialism. Not far right but far left. Do we really need to debunk this exercise in naive etymology anymore?

Also, in case you didn’t get the memo, Nazis were not atheists, but were generally Lutherans and Catholics. They also weren’t demonic satanists incarnate.

Where to start learning about antifa » « At the Close the Camps protest in Morris, Minnesota