It’s obvious that the one thing that is keeping Answers in Genesis afloat is that they’ve tapped into the same vein of fear and lunacy that Donald Trump draws strength from — so today Ken Ham posted cartoons to show all the things the rabid right fears most.

In the catastrophic storm of moral relativism that is sweeping the West, how do we raise generations who will not be swept away in the storm? We need to ensure they are anchored in the Word of God–anchored with answers to the skeptical questions of our day, taught a… pic.twitter.com/jatmaGFA8z 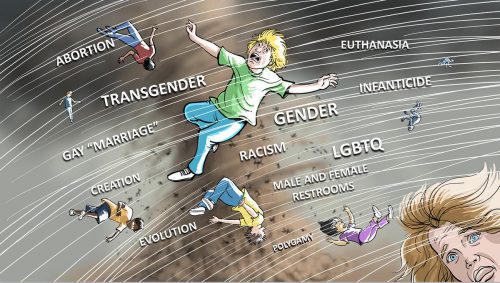 It’s a little weird that he’s got “male and female restrooms” whirling around in his imaginary tornado, and it’s a rather incoherent soup of words (is “creation” contributing to the chaos as much as “racism”?), but it’s also revealing. None of those words leave me feeling confused. Apparently, though, poor Ken and his cult-like followers want all the ideas to stop challenging them so he can cuddle up to his biblical anchor.

Jacob Wohl does it again » « Health care and colleges — does Canada have to do everything better than us?