Suddenly I’m seeing this image popping up all over. But it’s over ten years old! And worst of all, it’s not real — it’s made by an atheist, which explains why the list of characteristics sounds so awesome. It’s also not a particularly useful perspective on how non-atheists think. 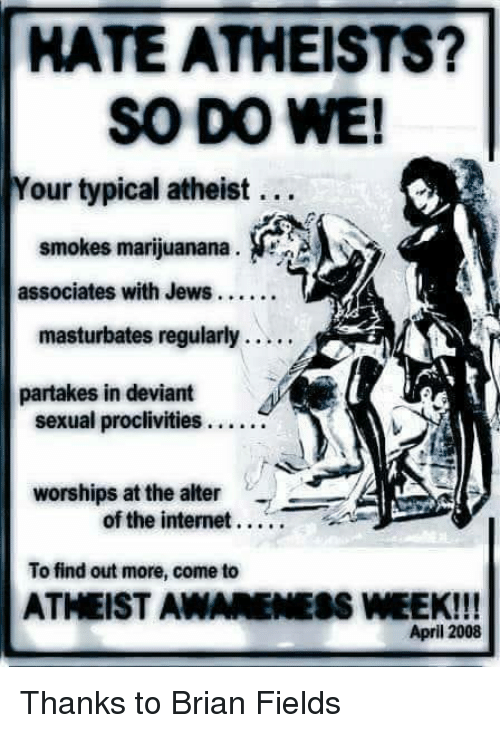 Hate atheists? So do we! Your typical atheist smokes marijuanana associates with jews masturbates regularly partakes in deviant sexual proclivities worships at the alter of the internet. To find out more come to atheist awareness week!!! april 2008

While I was trying to track this down, though, I ran across this old post on Scienceblogs by Matt Nisbet, which reminded me of how much I was hated by some of my colleagues on that site. No, really, you might have seen evidence of the friction in some of the published posts, but there were a couple of people who really pulled out the knives in the back channel. This is relatively mild stuff.

Consider this recent article at the National Catholic Register. Titled “The Face of the New Atheism,” it profiles PZ Myers and his rants against the Eucharist and the Catholic community. Notice the key words emphasized. The dominant image of atheism portrayed in the article is one of “hate,” “contempt,” “dogmatism,” “a junior high level understanding of religion,” “irate,” “incredulous,” “bigoted”…the list goes on.

Is this how we really want Catholics to view us? Do we really want a group of moderately religious Americans–who polls show otherwise prize science and reason, and who stand for many of the same values that we hold dear–to think of us through the prism of PZ Myers?

Right. The National Catholic Register. This is a guy holding up as a source an extremely conservative newspaper that idolizes Bill Donohue, echoing the arguments of Donohue and Mark Mathis, producer of the movie Expelled, which worships Catholicism, and considers atheists as tools of the anti-christ. I guess he thought it was as valid a source of information about atheists as anything else. It’s a bad memory. Sometimes things got rather toxic at the old site.

But what redeems it all is that Nisbet then goes on to cite as a counter-example, his paragon of what a good atheist should be. It’s DJ Grothe, the guy who later was found to have covered up sexual harassment at the Amazing Meetings, who abruptly left the JREF under a cloud, who was strangely characterized as a psychopath by people who had to spend much time with him, and who had a fondness for crude rape jokes.

I actually first met DJ Grothe about a year before at Dragon*Con in 2010. I had admired his work on Point of Inquiry and when he became president of the JREF I thought it would be a great thing. When I got a chance to meet him that year I was excited. We encountered one another at a Skepchick party (one that had to be moved to the lobby because of noise complaints as soon as it started). He was drunk, but it was a social occasion and I’d had a couple cocktails as well. No big deal. I was fairly surprised though, when DJ turned to me and said that the reason everyone loved the Skepchicks was because they “want pussy”. That seemed to be a rather dismissive and insultingly sexist way to dismiss the work of your professional colleagues (not to mention the people whose booze you were at that moment drinking.

I’m embarrassed to say that at the time I was still a bit fame-struck and too shocked to really process it. I didn’t do what I should have done, and told him how rude, insulting, and unprofessional it was to say something like that, even while drunk. Even in a casual social setting. But then it got more bizarre and incredible. I’m a tall guy, chubby (fat, honestly) and bearded. If I were gay I would definitely be a bear. This was discussed and DJ then made an hilarious horrendous “joke” about how I should pay him a visit down in Los Angeles so that he could drug me and let some of his friends have some fun with me. You know, in other words so that I could be gang raped.

Nisbet’s post hasn’t aged well, and I’m now proud to have been such a bad atheist, if that’s what atheism is supposed to be more like.

By the way, Rebecca Watson talked about Grothe back in 2014. If you want a glimpse into what a shitshow the skeptic/atheist movements have been, just read the comments.