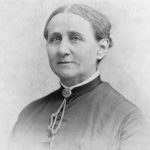 I’m a big fan of Darwin, and think he made an important contribution to the world of science, but I also have to remind you all…NO HEROES. I go even further than Edna Mode. He said a few things we’d all rather forget.

In The Descent of Man, Darwin argued that evolution made man “superior” to woman. For Darwin, that superiority largely played out in the intellectual and artistic realm. He wrote: “If two lists were made of the most eminent men and women in poetry, painting, sculpture, music—comprising composition and performance, history science and philosophy … the two lists would not bear comparison.” Spencer echoed Darwin’s sentiments and went further, postulating that in order for the human race to flourish, women must devote their lives to reproduction.

These assholish attitudes have afflicted science for a long, long time.

To compensate, everyone should go read that article about Antoinette Brown Blackwell.

Blackwell was among those grappling with science’s social implications. Reading works by scientists and social scientists such as Darwin and Spencer forced Blackwell to come to terms with her moral, religious and scientific beliefs. Just as Blackwell preached against Biblical passages that were at odds with her ethics, she began to write against scientific theories that she believed to be biased. Through her writing, she reconciled her understanding of science with her religious beliefs: “If one can perceive a truth,” she wrote, “it matters very little whether he got it at first hand from God’s book, or from man’s.”

Blackwell had no formal scientific training, which she freely admitted. But she read widely. Although she knew her critique of Darwin and Spencer—who she called “the great masters of science and scientific inference”—would be seen as presumptuous, she believed she had one qualification to address inequality of the sexes through evolution: she was a woman.

To refute Darwin and Spencer’s claims that the process of evolution made man superior to women, it was vital to Blackwell that women weigh in. Male scientists, Blackwell wrote, stood on “a learned masculine eminence, looking from their isolated male standpoints through their men’s spectacles and through the misty atmosphere of entailed hereditary glamour.”

In other words: Men, by virtue of being men, were biased, and so too were their scientific theories. And if women, such as herself, had little scientific training, so be it. “There is no alternative!” Blackwell exclaimed. “Only a woman can approach the subject from a feminine standpoint; and there are none but beginners among us in this class of investigations.”

Lutefisk really isn’t that bad, but Nigerians might have a better idea » « David Klinghoffer thinks Science had to gang up on Behe