Say “motherfucker” once, and the media melts down; but when a representative announces his allegiance to racist white supremacy, it’s business as usual. 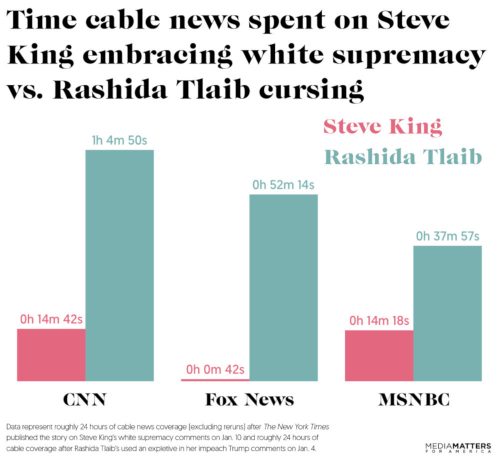 I tried to rationalize this. Maybe “motherfucker” is more sound-bitey? But it’s also kind of generic, and lots of people have said far worse about various politicians. And you would think that a politician openly embracing a racist ideology would be far more newsworthy and would inspire a lot more discussion than a profanity, about which you really can’t say a whole lot.

I think it means the media, and our country, takes racism for granted. Add to that fact that Rashida Tlaib’s exclamation was an opportunity to exercise that racism by bashing a brown woman, and I think we’ve got the root cause of the discrepancy thoroughly covered.

I know how to fix the Alexandria Ocasio-Cortez “problem”! » « Friday Cephalopod: It’s good to be squishy