To look for spiders, of course. Mary and I were getting into the spirit of the season and were surveying the area for spiders this morning. We were heartened by the fact that she discovered a salticid in our house — I’d given up on looking, assuming that no self-respecting spider would be out and about in late December in Minnesota, but there it was. So we donned our headgear and started scrutinizing window frames and dusty corners, and we also trooped over to the science building on campus and checked out the hallways and the basement.

Mary caught me in dynamic action pose, staring at cobwebs. 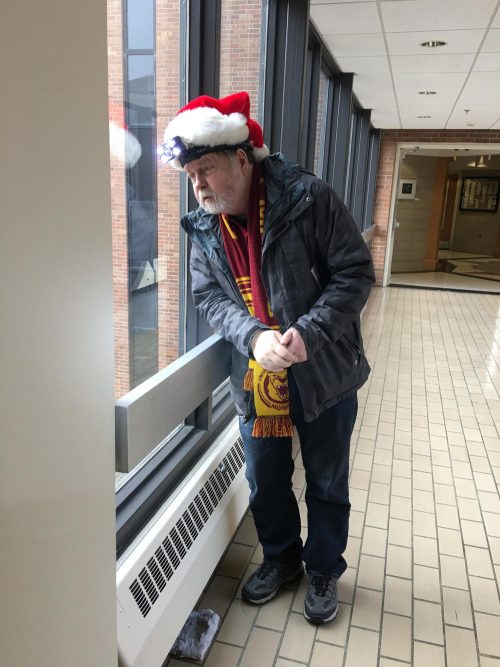 Unfortunately, the spider population was sparse or in deep hiding. We found another salticid in my office, and the husks of a few dead pholcids (lots of pholcids thriving in our basement, though), but no Theridiidae. There were also a few abandoned funnel webs outside. One problem is that the university custodial staff do a really thorough job of demolishing cobwebs and making an inhospitable environment for spiders…and I don’t think there are very many insects to eat there, except maybe in relatively unreachable places, like crawlspaces.

It’s also cold outside. I’ll be interested to see how the population changes in the Spring.

Hope you’re having an unspeakable holiday » « There is a hell