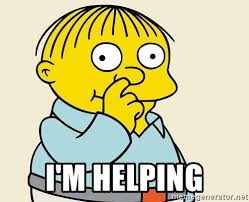 Bill Donohue has come out with his defense of the Catholic Church in the Pennsylvania case (pdf). A couple of things leapt out at me. He often parses the language finely to excuse the problems. For instance, it wasn’t rape.

Most of the alleged victims were not raped: they were groped or otherwise abused, but not penetrated, which is what the word “rape” means. This is not a defense—it is meant to set the record straight and debunk the worst case scenarios attributed to the offenders.

Furthermore, Church officials were not following a “playbook” for using terms such as “inappropriate contact”—they were following the lexicon established by the John Jay professors.

Examples of non-rape sexual abuse found in the John Jay report include “touching under the victim’s clothes” (the most common act alleged); “sexual talk”; “shown pornography”; “touch over cleric’s clothes”; “cleric disrobed”; “victim disrobed”; “photos of victims”; “sexual games”; and “hugging and kissing.” These are the kinds of acts recorded in the grand jury report as well, and as bad as they are, they do not constitute “rape.”

Then he plays games with the numbers.

How many of the 300 were probably guilty? Maybe half. My reasoning? The 2004 report by the John Jay College for Criminal Justice found that 4 percent of priests nationwide had a credible accusation made against them between 1950-2002. That is the figure everyone quotes. But the report also notes that roughly half that number were substantiated. If that is a reliable measure, the 300 figure drops to around 150.

Also, even if he were right (he’s not), it’s 150 child molesters in the Pennsylvania clergy. What number is acceptable? I’m saying zero would be a number to shoot for.

His next excuse: most of the cases can’t be tried, because we’ve past the statute of limitations.

Pennsylvania Attorney General Josh “Salacious” Shapiro admitted on August 14 that “Almost every instance of child abuse (the grand jury) found was too old to be prosecuted.” He’s right. But he knew that from the get-go, so why did he pursue this dead end?

Because even if the crime can’t be prosecuted, the criminals should be exposed? Because this is an ongoing problem in the Catholic Church, so the church needs to be constantly prodded to make changes? Because the law isn’t always about justice, but justice must be pursued?

And then, most despicably, he doesn’t mince words in one excuse. This isn’t a problem with pedophilia in the church; this is a problem with The Gays.

How do I know that most of the problem is gay-driven? The data are indisputable.

It’s an 80/20 male/female ratio of victims, but priests are 100% male, and priests are mostly going to be in charge of boys and young men. This ratio sounds like a ratio of opportunity.

Did I say he doesn’t play word games with this one excuse? Not quite. You see, Donohue argues that if the victims were post-pubescent, it doesn’t count as pedophilia. I don’t see a difference that matters — they’re all minors under the supposed care of the priest. It’s a vile abnegation of responsibility and decency. But to Bill, it’s just plain The Gay Abomination.

How many were pedophiles? Less than five percent. That is what the John Jay study found. Studies done in subsequent years—I have read them all—report approximately the same ratio. It’s been a homosexual scandal all along.

No, Bill. It’s been a Catholic scandal all along, and you’re not helping.

I may have found a mirror universe » « Friday Cephalopod: Another sign of the Cephalopocalypse