After all, it’s a bigger problem for Iowa and Missouri than it is for New York City.

Hey, guys. We need to talk. About your sperm.

Here’s the thing. I see a lot of noise online about measures of masculinity: you have to have a Y chromosome (but no, you don’t, and I’m going to guess that fewer than 1 in a hundred have actually checked to see if they have one). I hear about testosterone levels…but T levels vary greatly from person to person, and over the course of your lifetime, and within a very broad range, don’t affect your health or fertility or libido. The biggest nonsense is all the talk of soy and soy boys, and sorry, gang, soy products are good for you and really don’t have any significant effect on your sexuality by any measure.

But you know what has shown a real, measurable, and worrisome trend over the years? Sperm counts and sperm morphology. On average, we men are making fewer sperm than our father’s generation was, and what we’re making has a greater frequency of abnormalities. You should care about this. Declining sperm counts are also correlated with higher frequencies of testicular cancer, hypospadias, and cryptorchidism, and testicular dysgenesis in general.

Mother Nature has been kicking you in the nads for decades. You should wake up and pay attention.

This is not to imply that your manliness is a product of your sperm count — if you have had a vasectomy, a very mature and responsible thing to do, your sperm count is zero, yet your masculinity has not been diminished.

What it is is a canary in the coal mine situation. You are producing on the order of 100,000 delicate, specialized sperm cells every minute — imagine that, you’ll make roughly a million sperm while watching this video. It then takes over two months for each sperm cell to mature. It has to be carefully nurtured in your testes, refined down to a streamlined little torpedo with minimal wasted space, and packaged with specific enzymes, bristling with chemical sensors and signalling triggers, all poised to race through a fiercely hostile environment and home in on a single cell as a target.

You are basically manufacturing a 100,000 precision-guided ovum-seeking missiles every minute, and it’s easy for things to go wrong. Did you have a fever in the last few months? Boom, production measurably drops. Are you a smoker? Whoops, volume declines by as much as 10%. Your testicles are delicate and fragile. You know this. You learned that at a very tender age. Even subtle environmental insults can affect quality control in the sperm production line, making analysis of semen a useful tool for for identifying growing problems.

This is not to say that semen analysis is easy. It turns out that there is a lot of individual variation, a lot of even regional variation (which I’ll get to later), and methodological variation. It takes considerable statistical rigor to extract the signal from the noise. For example, there are a lot of studies of sperm counts from individuals going to fertility clinics — that means there’s potential for some extreme sampling bias. There have been changes in how we count sperm — it’s increasingly common to use automated flow cytometry, with computers doing all the counting, a technique that wasn’t available 50 years ago. So the studies have to control for a lot of variables. But the answers are…not good.

Let’s look at one of the granddaddies of this kind of research a paper by Elisabeth Carlsen and colleagues, from 1992. This is a paper that looked at 61 other papers published between 1938 and 1990, involving sperm counts from 14,947 men, and controlling for a lot of those confounding variables. And the alarming results are shown here. 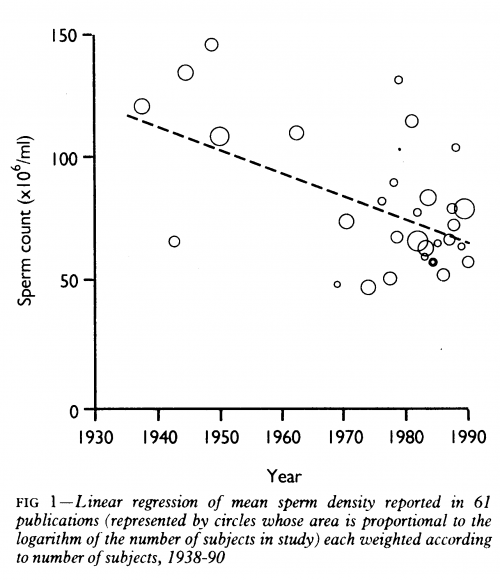 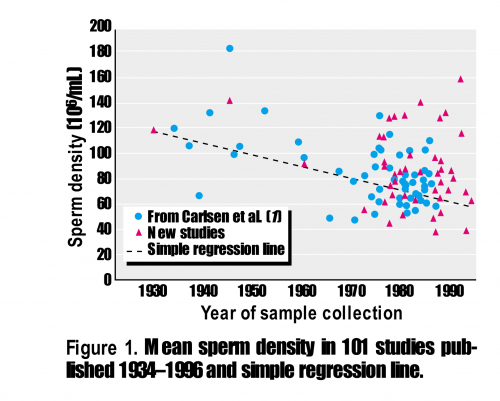 Can we get a second opinion on that? Yes. Getting an independent reanalysis is a good idea, and in 2000 Shanna Swan and her colleagues provided one. They added 47 more papers to the data set, and specifically looked at trends between 1990 and 2000. The diagnosis holds up. It’s a little worse, actually. The decline in American sperm counts is about 1.5% per year; and when you pull out the European and Australian data, they’re even worse off, with a decline of about 3% per year.

Uh-oh. You may be saying to yourself at this point that those are massive declines — at this rate, won’t humanity go extinct within a century or so? I will point out that those are AVERAGES, OK? It suggests that there will be increasing numbers of men who will have fertility problems, but others will not. It’s those others who will just father all the babies. Cue shudder of terror from all those guys who march around chanting “You will not replace us”…you might be replaced after all. We’ll see. Although there’s no indication of a “white genocide” going on, because those average numbers are declining all around the world.

It’s also not an irreversible trend. We have some data from a Danish study that focused on one location in Denmark, tracking the average sperm counts here in the 21st century. The good news is the numbers went up! Slightly. Very slightly.

A at the top is a graph of sperm concentration and the middle graph B is of total sperm count. They go up a bit between 1996 and 2010! It might not be readily visible to the eye, but trust me, it’s statistically significant and real. Yay!

The bad news is the bottom graph, C. That’s a plot of the percentage of morphologically normal sperm, and that’s flatlined. Worse, that percentage is in the single digits. You might be making a million sperm while watching this video, but maybe 90% of them are defective. That’s not great. The authors point out that the levels are so low that about 15% of men will need clinical help if they want to have children, and another 27% are going to have to make a prolonged effort to getting anyone pregnant.

So let’s do a thorough study and compare different American regions. This paper looks at sperm parameters in four different places: New York City, Los Angeles, Minneapolis Minnesota, and Columbia Missouri. The comparisons between Minnesota and Missouri are most enlightening, because both are Midwestern states with much in common, but the Minnesota sampling is from a metropolitan area, while the Missouri samples are much more rural.

I’m sorry to say that Missouri comes in dead last on all measures, except ejaculate volume — men in every state are putting out about the same amount of semen. It’s just that Missourians are pumping out lower quality sperm. Nothing personal, guys. 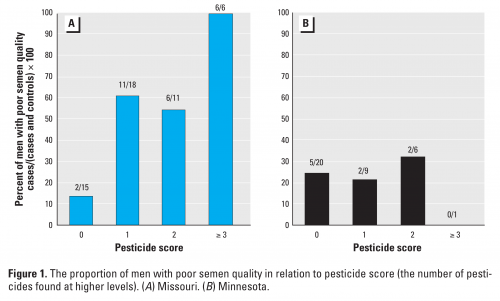 Really, it’s not your fault. What’s different about rural vs. urban? It’s the farm products. In the countryside, you are swimming in herbicides and pesticides that are sprayed on local farms. So the researchers did blood tests on these men, looking for metabolites of common agricultural chemicals. We’ve all got ‘em, but if you’re living in farm country, you’ve got more of ‘em than if you live in a city. And they found a clear correlation between poor sperm quality and numbers, and the concentration of pesticides and herbicides in the blood.

They even identified some of the bad agents: alachlor, diazinon, atrazine, and metolochlor. Avoid getting exposed to these, as they well probably pollute your precious bodily fluids.

To my vast relief, because it is mosquito season where I live, DEET doesn’t seem to have an effect.

So the bottom line is that everyone’s sperm are messed up — but some are more affected than others. Ironically enough, it’s the red-staters who are getting wacked in the testicles most of all — the same red-staters who want to reduce environmental protections, and who put Scott Pruitt in charge of the EPA. Conservative guys, why aren’t you concerned about conserving the quality your little Onward Christian Soldiers? Maybe it’s because this is another of those attributes of masculinity that you can’t actually see without making a special effort.

Oh, and speaking of irony: while browsing the literature on sperm counts, it was really weird to see that most of the authors behind this research are women. Or Danes. So I looked up a few other things, and perhaps to no one’s surprise, women are far more concerned about preserving the environment than men are, and women are better environmentalists than men are. So the people who ought to be most concerned about this issue are the ones doing the least to investigate it, and the ones doing the most to make it worse.

What can be done? I can tell you that I can’t escape pesticides — I live in rural Minnesota, this is the peak time of year for farmers to treat their crops, and this stuff is in the air and water around me. We have to think in the long term, and that means strengthening government regulations, better monitoring of farm chemicals.

Or are you really willing to swap your balls for cheap corn?