These are rosaries confiscated from illigal immigrants by the Customs and Border Patrol, salvaged by a custodian at the processing station. 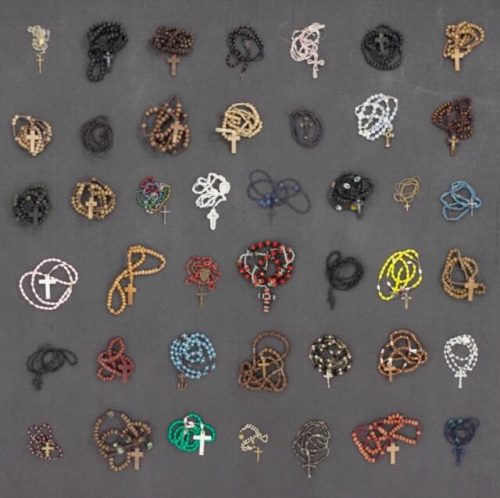 Here I am, a guy who despises religion and sees no magical value at all in these items, and I have to say that that is inhumane. This is not right. This is wrong.

…Kiefer sees his project as a counterweight to C.B.P.’s dehumanizing practices, which yank everyday objects from the contexts that imbued them with meaning. He hopes not just to draw people’s attention to those practices but also to evoke the value the objects must have once had to their owners. “I’m doing something different,” he told me. “I’m presenting these deeply personal objects in a way that is reverential and respectful.”

Yes, that something has no value to me does not imply that it has no personal value to others. We can only strip these away if we first decide the others have no value — we’re in the midst of a great effort to dehumanize anyone who opposes a certain narrow set of selfish values.

If we can take away their rosaries, we can also lose their children. We can break up families.

For months, stories have abounded of families separated by immigration authorities at the border: Three children were separated from their mother as they fled a gang in El Salvador; a 7-year-old was taken from her Congolese mother who was seeking asylum; and so on, in reportedly hundreds of cases. In almost every case, the families have described heart-wrenching goodbyes and agonizing uncertainty about whether they would be reunited.

According to the Florence Project, an Arizona nonprofit organization that provides legal and social services to detained immigrants, there have been more than 200 cases of parents being separated from their children since the beginning of the year in the state alone.

But don’t worry! They have a rationale for what they’re doing — they are being intentionally brutal as a deterrent to immigration.

In a May 11 interview with NPR’s John Burnett, White House Chief of Staff John F. Kelly referred to family separation as something that would be a “tough deterrent” to migrant parents who may be thinking of bringing their children to the border.

It might work. I’m beginning to think the United States of America is a terrible place to live, myself. This is a time-honored strategy on the right…for instance, it’s how Ted Nugent avoided the draft.

I got my physical notice 30 days prior to. Well, on that day I ceased cleansing my body. No more brushing my teeth, no more washing my hair, no baths, no soap, no water. Thirty days of debris build. I stopped shavin’ and I was 18, had a little scraggly beard, really looked like a hippie. I had long hair, and it started gettin’ kinky, matted up. Then two weeks before, I stopped eating any food with nutritional value. I just had chips, Pepsi, beer-stuff I never touched-buttered poop, little jars of Polish sausages, and I’d drink the syrup, I was this side of death, Then a week before, I stopped going to the bathroom. I did it in my pants. poop, piss the whole shot. My pants got crusted up.

See, I approached the whole thing like, Ted Nugent, cool hard-workin’ dude, is gonna wreak havoc on these imbeciles in the armed forces. I’m gonna play their own game, and I’m gonna destroy ’em. Now my whole body is crusted in poop and piss. I was ill. And three or four days before, I started stayin’ awake. I was close to death, but I was in control. I was extremely antidrug as I’ve always been, but I snorted some crystal methedrine. Talk about one wounded motherf*cker. A guy put up four lines, and it was for all four of us, but I didn’t know and I’m vacuuming that poop right up. I was a walking, talking hunk of human poop. I was six-foot-three of sin. So the guys took me down to the physical, and my nerves, my emotions were distraught. I was not a good person. I was wounded. But as painful and nauseous as it was — ’cause I was really into bein’ clean and on the ball — I made gutter swine hippies look like football players. I was deviano.

It’s the Ted Nugentification of America!

Do not play gotcha games with @upulie, even if you are a billionaire » « He’s never going to be a movie star at this rate