I went into The Avengers: Infinity War with very low expectations, and they were met, so I guess I can’t complain or ask for my money back or scream that Marvel must die, so I’ll just note that comic book movies are facing the same problems that superhero comic books have always had: when you start with a protagonist with incredible powers, where do you go from there? The answer is usually…ever upward. More powers, more powerful villains, more allies with equal or greater powers, and before you know it, the hero who was stopping purse-snatchers and bank robbers in the first issue is now deciding the fate of the entire universe with a league of demi-gods. And gods are boring.

To counter the boredom in the audience and, I’m sure, the writers, there has to be a series of metamorphoses. The name on the comic book is what sells, so you can’t just abandon 1930s Superman or 1960s Hulk, you’ve got to start changing the characters into brand new beings. New powers, new weaknesses, new conflicts, but the same old label. You know the Superman I read as a kid was not the same Superman kids read in the Depression years is not the same Superman kids are reading in the 21st century, right? It’s protean chaos.

And then there’s another part of the recipe: if the story is getting stale, bring on the crossovers! Mix and match different comic books with different formulas and different tones — it doesn’t matter. Sure, team up Spider-Man and Thor. Set Batman against Superman. Mix up the psychedelic weirdness of Dr Strange with psycho Rocket Raccoon. None of it makes any sense, but nerds love that “What if…” crap.

Infinity War is all that and more. So many characters, each with their brief moment in front of the camera. So many locations — I was getting lost, with sub-groups splitting off and charging on to sub-quests on different planets, different imaginary places on Earth, and absolutely no attention paid to time. Apparently, in the Marvel Universe, everyone who matters has their very own personal faster-than-light travel device. So many plotlines, so many different maguffins (6 arbitrary colored stones means we can easily try to achieve 6 different goals at once! Exactly what makes for an insightful movie). They’re in Wakanda for a yellow rock. They’re in New York for a green one.

Then with that buffet of chaos, they resolve everything in exactly the same way: punch stuff. Lots of punching here. There’s a gigantic set-piece battle with hordes of trans-dimensional demons led by space wizards against the futuristic technology of Wakanda and Tony Stark, and it’s just a brawl with everyone punching everything else in hand-to-hand combat. The main villain, Thanos, doesn’t seem to have any qualities that make him particularly potent, except that he’s very, very big and strong and can beat up the Hulk in a one-on-one fight. Somehow, I just don’t think that’s a quality that would be particularly valuable in a ruler of the galaxy.

And then there are the stakes. The stakes have become so unimaginably high that they’ve become cheap and petty all over again. Thanos’ goal is to kill half the people in the universe for what, in the movie, are simultaneously vainglorious and altruistic reasons. He’ll save us from ecological collapse, and everyone will praise him for it. So — and this is no spoiler, I won’t say who — he kills some of the heroes. In fact, I think he kills more than half, and he wipes out entire vast swathes of the Asgardians and the Dora Milaje. It’s a total bloodbath in there.

Which would be an interesting way to reboot a stale ensemble, and also make the risks the heroes are taking seem genuine and important. The death of a major character should be a huge pivot point for story.

Unfortunately, it’s not. None of them are. The slaughter was so wholesale that it took me right out of the movie. Marvel has just disintegrated multiple, massive profit-making franchises, series that made billions of dollars, in one grand gesture? I can not believe it. Not for a second. Also, if this were a genuine creative decision to reshape their movie universe to go in a new direction, we’d have known about it when the news got out of dozens of Marvel and Disney executives clutching their black bean-counting hearts and dying in apoplectic fits. Therefore, none of the major outcomes of this movie are real. There’s going to be another big budget movie in the near future in which they magically rewind everything and reset it back to it’s diversely profitable state.

We got a hint of that in this movie. One character dies, literally vaporized, and Thanos uses one of his magic rock powers to reconstitute him, take some treasure from him, and kill him again. Trust me on this: none of the deaths in this movie matter to Marvel’s bottom line, and they will be restored and repaired to go on and print more cash. It makes this whole effort futile.

But I will say this for The Avengers: Infinity War, it packed the house. I’ve never seen the Morris theater that full of people. It was also an enthusiastic crowd. The whole theater cheered when fan favorites made their first appearance: judging from the whoops, Thor, Captain America, Bucky, and the Black Panther are immensely popular. Too bad at least one of those four is going to get killed by the end.

The audience also applauded mid-movie when heroes made really good punches in the frequent slugmatches. They laughed at some of the laugh lines (there weren’t many, and they weren’t that great — a sense of humor was one of the casualties of the cosmic scope). It was a wonderfully responsive and enthusiastic audience. I definitely liked that part.

It was also amazing how, at the end of the movie, there was this tremendous hub-bub of conversation. I saw people spontaneously get into excited discussion groups, whipping out their phones and engaging with each other and the world at large, gushing and arguing about the movie. That’s a good reaction. They were not leaving, of course, because as everyone knows, Marvel always puts a teaser scene at the end of the credits, so you have to stay and wait for that. They went completely silent when the scene started — we also got to watch even more beloved movie characters die — and then just erupted and went totally nuts at the reveal of a single simple logo on Nick Fury’s cell phone. I guess we got a hint about who is going to reassemble the fractured mess this movie made of the Marvel/Disney business model. 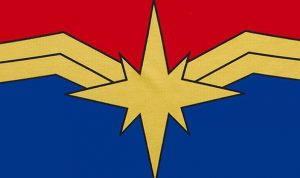 Except, wait, the next movie is set in the 1990s. That can’t be the restoration, can it? Are they going to milk this comic book tragedy for at least two years?