Gosh, this has been a busy week of late nights and paperwork and search committees and trying to catch up with my backlog as the semester winds down to a close. And then I realized…I forgot something. Something something something I’d been planning to attend on Monday. D’oh!

I completely missed Dinesh D’Souza’s visit to our campus. I’d noted it, and there are great big posters everywhere of his gormless goony face, but still — on the appointed day and hour, I had so little interest in the event that I didn’t even remember it enough to tell myself I was too busy to waste an hour on it.

I wondered how it went, but when I asked around, no one else had attended either, or remembered that it was going to happen. We just didn’t care. I’m sure the UMM College Republicans were disappointed, too. Where was antifa? Where were the shrill mobs of feminists and progressives and radical leftist students and old hippies?

So I thought I’d look in on the UMM College Republican web page. Surely they’d have a report on the talk by their hero, brought in to antagonize a liberal campus. They’ve got nothin’. Well, not exactly nothing: they mention their victimhood at length (someone let the air out of one of their tires; probably a black op. One of their members found a used condom thrown at their door…which sounds like an icky college student prank, but you never know where the tentacles of George Soros will strike), and talk about the party they threw for the graduating president of the club, who was given a “Most Hated Person at UMM” award. I felt bad for them. I don’t even know who they are. If it would be validating, I might be willing to muster a vague feeling of pity, but sorry, not hating.

They had photos of the party. They are very sad. 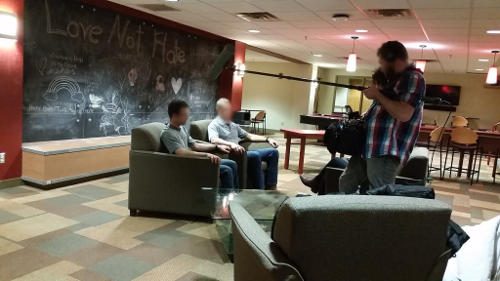 So their big event of the semester with a nationally known speaker was kind of a pathetic bust. They’ve got like four people at their graduation party. I guess I am feeling that vague pity after all.

If I knew who they were, maybe I’d raise a fist and say “Comrade! Workers of the world, unite!” as I passed them in the hall, just so they’d feel like their life goals had meaning.

I guess this is the forlorn, empty fate of conservatives, eventually. I don’t think Trump has helped their brand.

Oh. I checked the facebook page for the event. Even sadder.