It’s an odd thing how some people are scrabbling to invent markers for maleness, as if it is the sole defining feature of their existence, and yet must be constantly validated with sciencey affirmations of invisible phenomena. So we get statements about the utter certainty of the Y chromosome being the definitive factor in being male, from hordes of people who’ve never seen their own karyotype, some small fraction of whom might well have curious chromosomal abnormalities. Will it change who they are if a variation is found? No, not at all. We live in a fairly modest culture, too, and yet we want to declare possession of a penis to be the one great truth behind masculinity…yet I’ve never seen any of your penises, nor have you seen mine. We make demeaning jokes about small penises, but we don’t actually inspect them.

There’s another invisible attribute I’m seeing touted as important to your masculinity: testosterone levels. I’ve seen the silly commercials that try to sell supplements to correct that bane of men’s lives, Low T. 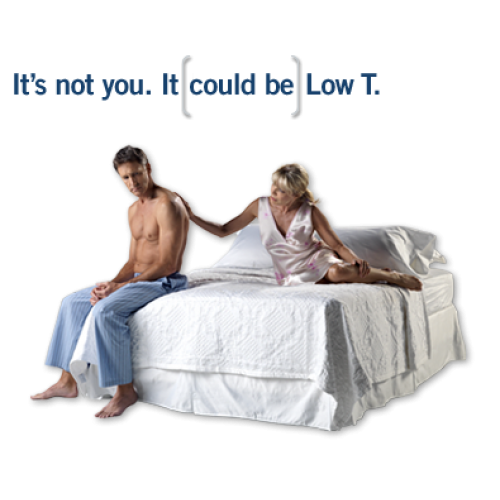 Well, that’s blatant. I better buy me a case of them there pills, lest I suffer the pity of a woman.

The thing is, most of us don’t know what our testosterone levels are. I get twice yearly checkups and get tapped for buckets of blood, and I’ve got reports on levels of triglycerides, HDLs, LDLs, CPK, all that important stuff that matters if you’re concerned about heart disease, but darn, they never bother to check my T levels, and I always forget to ask. Except for certain serious extremes, T levels don’t matter that much, and they certainly aren’t a major factor in that indefinable thing called “manliness”. I also note that half the population seems to function just fine with incredibly low T levels.

But now you’ve got shady companies trying to sell you supplements, and to them it’s really important that you consider T levels vital. The latest round of silliness from the alt-right has them accusing SJWs of being “soy boys”, that consuming products containing soy reduces their T levels. They don’t know! Testosterone levels vary within populations, to no obvious discernible effect, so it amounts to one group of people sneering at another group of people over their blood chemistry in complete ignorance of what it actually is. I feel like the only rational response in such an argument is to whip out a rubber strap and a syringe with a wicked sharp 21-gauge needle and offer to take a sample.

Or, I suppose, we could just have some medical professionals do a clinical assessment of the effects of testosterone. Oh? It’s been done?

So researchers set about designing the Testosterone Trials: double-blind, randomized, placebo-controlled clinical trials—the gold standard in medicine. They went looking for thousands of men over 65 with low T and at least one of its supposed symptoms. When the first findings came out in February 2016, one thing stood out from the start: Of the more than 51,000 men who had been screened, fewer than 15 percent had testosterone levels low enough to be enrolled, even after the researchers relaxed their testosterone threshold. The widely held idea that low T is rife among older men seemed to be a myth.

All told, the studies found that T did not improve men’s physical function or vitality. Nor did it help with age-related memory impairment. It did help with anemia and bone mineral density. It increased sexual desire and activity, but the effect was modest; men were better off using Cialis or Viagra. The most worrisome findings came from a study on cardiovascular risk: In men with certain risk factors, T accelerated coronary atherosclerosis, possibly increasing their chance of heart attack.

If you want to argue with this, I’m going to accuse you of having low aldosterone levels. Or was it cholecystokinin? One of those things neither of us ever bother to actually measure, anyway.

Did you miss “How to Incorporate a Secular Values Message into Your Advocacy”? » « Remember when…?