There was a guy wandering around the edges of the Iowa City women’s march, putting up white supremacist stickers, and looking like this: 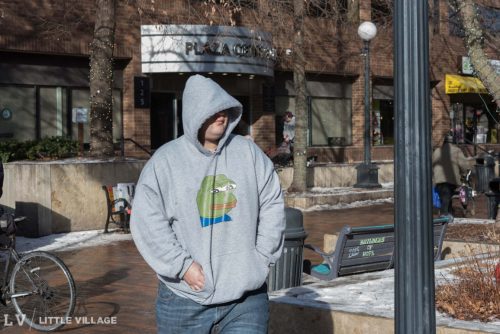 He was pursued, non-violently, and people were taking photos of him to document his activities. He hid in a building and started making phone calls. None of this was illegal, nor were any of the marchers doing anything illegal — he was just being obnoxious, and his sweat shirt was provocative, obviously intentionally so.

What struck me, though, was this bit of the story.

“I was standing outside MERGE looking through the photos I’d taken, when a young woman in a blue hoodie came up to me,” Sarsfield said. “She asked if I’d taken photos of her boyfriend. I asked her if her boyfriend was the one putting up the white supremacist stickers.”

“She said, ‘Yes,’ and that he’d called her saying he was in MERGE. She said she wanted me to delete the photos, because this whole thing was traumatic for them,” Sarsfield recalled. “She said he’s not a racist, he just likes to do these things to get a rise out of people.”

Really? REALLY? I know the 4chan crowd likes to maintain a pretense of ironic mockery, but there are limits. Dress like a racist, act like a racist, spread racist slogans, you are a racist. I don’t care if you’re hiding behind your cloak of anonymity, you are still a bad person.