It must be tricky to critique flat Earth stories, which are risibly goofy and in defiance of the evidence, when you personally believe in young Earth stories, which are just as idiotic, but Danny Faulkner of Answers in Genesis tries. He attended a flat earth conference, and what’s remarkable about his essay is how gingerly he treads. Make no mistake, Faulkner does not believe in this flat earth crap, he gives a few specific criticisms of some of their rationalizations, and it is not currently the policy of Answers in Genesis to support flat earth claims (they say the Bible does not claim the Earth is flat), but give them time — if flat-earthers become numerous enough to be fleeced, expect even more niceness from AiG.

It’s just the irony of it all. Faulkner was getting a little taste of how loony these fringe Bible kooks look to the rest of us, with their weird claims that flout all the evidence, but are fervently held solely because they connect them to their religious beliefs. No, the Bible doesn’t flat out state that the Earth is flat, but it is a reasonably inferred part of the mythology, and there are all kinds of hints that the ancient authors modeled the world that way; it also doesn’t come right out and say that the Earth is only 6000 years old, but it is also clear that the ancient authors had no concept of deep time, and so AiG has inferred and imposed a set of interpretations on the Bible that bolster their preferred preconceptions. There is no difference between flat-earthers and young-earthers in their methodology or their biases or their abuse of science.

There’s also the lack of perspective. I’ve attended creationist events, and this is exactly what they sound like: disappointingly vague, reliant entirely on religious testimonies and that damnable Christian persecution complex.

I was a bit disappointed by the content of the conference. I had expected that I would hear and see information about flat-earth that I hadn’t encountered already, but that wasn’t the case. Many of the presentations largely were personal testimonies of how people had come to believe in flat earth. Hence, I didn’t learn much about the flat-earth model that I didn’t already know. However, I did learn much about the flat-earth movement itself. In conversations and in the presentations, I learned how people came to lose jobs, friends, and even family members once they, in their own words, “came out of the closet about flat earth.” Therefore, many of the people in attendance clearly viewed the meeting as a safe refuge where they could meet ostracized people like themselves. This clearly brought joy to many attendees, and I suppose the last thing these people would do would be to castigate someone in their midst who isn’t a flat-earther, provided that person behaved as a guest.

I’ve never seen a creationist talk that wasn’t thickly larded with personal testimonies about their religious beliefs, that didn’t end with pious ranting about Jesus, and that wasn’t full of offended indignation that those wicked seculars wouldn’t let them preach the Gospel in public schools.

If you want some real fun, Faulkner mentions this nice flat-earther he met, named Noel Hadley. He’s a hoot. He thinks Francis Crick learned about the structure of DNA from LSD-fueled sex parties, Peruvian shamans, ancient Egyptians, and snake myths.

But let’s not forget, the Egyptians also had a part in Crick’s discovery. Did Pharaoh not wear a cobra on his crown as a symbol of the divine word and third eye—the pineal gland—by which true hidden knowledge might be discovered to the devoted initiate? In his book, The Secret in the Bible, author Tony Bushby suggests the capstone of the Great Pyramid was once a clear crystal or glass that produced a visible beacon of light from its apex. He writes: “Whenever a light is shone down into a glass pyramid in exact scale or proportion as the Great Pyramid, a ‘Rainbow Serpent’ is created. The light provides a type of force or energy that, in turn, creates the vertical spiral of light, a serpent upraised, invisible in rock, but visible in a clear substance. That is what the Ancient Egyptian Priesthood meant when they said, ‘A serpent lies coiled in the Great Pyramid.’” Bushby’s conclusion is as you might now suspect. The Rainbow Serpent, directly referenced by the priesthood, was a double helix like representing Francis Crick’s strand of DNA.

Every continent seems to have a role in ancient serpent worship. Claude Lévi-Strauss writes of the Aztecs: “In Aztec, the word coatl means both ‘serpent’ and ‘twin.’ The name Quetzalcoatl can thus be interpreted either as ‘Plumed serpent’ or ‘Magnificent twin.’” Throughout shamanic religions, from Australia to Tibet and eastern Asia, back into Egypt again, throughout Africa, and finally North and South America, visions of “spiral ladders” or “braided ropes” cannot be overlooked either. Authors Mircea Eliade, Willard R. Trask, and Wendy Doniger write in Shamanism: Archaic Techniques of Ecstasy, “the symbolism of the rope, like that of the ladder, necessarily implies communication between sky and earth. It is by means of a rope or a ladder (as, too, by a vine, a bridge, a chain of arnyaw, etc.) that the gods descend to earth and men go up to the sky.”

Right. The guy who illustrated his article with this abomination knows a lot about DNA. 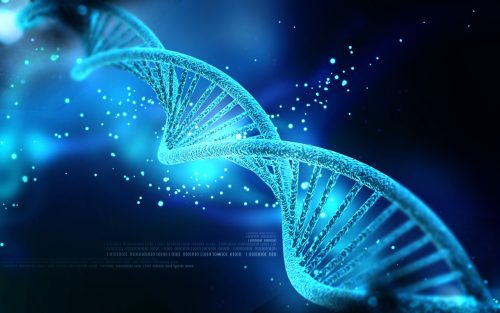 Danny Faulkner, meet Noel Hadley. You two are indistinguishably crazy twins, and you don’t even know it.

I expressed myself about Genesis: Paradise Lost » « It all depends on how you define “success”