It should also start with a “K”. You may have heard that James Damore is continuing to discredit himself further with some weird musings on Twitter. 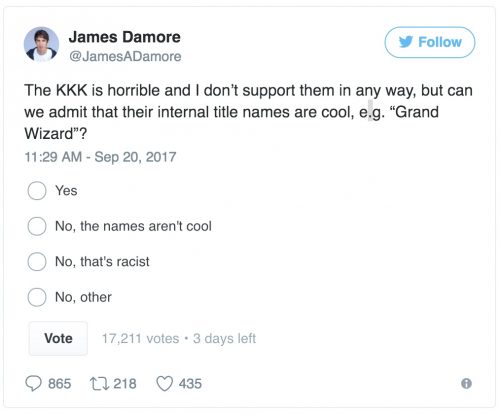 Here are some internal title names for the Klan. Still cool?

You can call yourself whatever you want. But let’s not forget that the KKK is all about terror, bigotry, and murder, and all the cool names in the world won’t change that.

Damore also has an explanation for why people join the KKK. It’s not racism. It’s not even ‘economic insecurity’. It’s because they want to be called a Klokard.

Jebus. The question is no longer about why Damore was fired from Google, it’s how did he get the job there in the first place?

I still don’t have a good word for Damore, so I’m going to have to invent one. Klaggart. Or maybe Klook.

Ripping on the History Channel is always fun » « Let There Be Ignorance!