This is a Viking grave from Sweden — a high status warrior buried with weapons and jewelry and two horses. It was assumed it had to be a man, but closer investigation revealed that the bones were those of a woman — and now genomics has confirmed it. 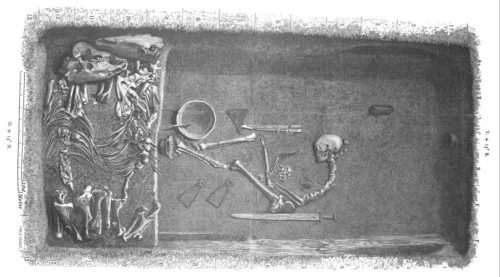 Do weapons necessarily determine a warrior? The interpretation of grave goods is not straight forward, but it must be stressed that the interpretation should be made in a similar manner regardless of the biological sex of the interred individual. Furthermore, the exclusive grave goods and two horses are worthy of an individual with responsibilities concerning strategy and battle tactics. The skeletal remains in grave Bj 581 did not exhibit signs of antemortem or perimortem trauma which could support the notion that the individual had been a warrior. However, contrary to what could be expected, weapon related wounds (and trauma in general) are not common in the inhumation burials at Birka. A similarly low frequency is noted at contemporaneous cemeteries in Scandinavia. Traces of violent trauma are more common in Viking Age mass burials.

Although not possible to rule out, previous arguments have likely neglected intersectional perspectives where the social status of the individual was considered of greater importance than biological sex. This type of reasoning takes away the agency of the buried female. As long as the sex is male, the weaponry in the grave not only belong to the interred but also reflects his status as warrior, whereas a female sex has raised doubts, not only regarding her ascribed role but also in her association to the grave goods.

Grave Bj 581 is one of three known examples where the individual has been treated in accordance with prevailing warrior ideals lacking all associations with the female gender. Furthermore, the exclusive grave goods and two horses are worthy of an individual with responsibilities concerning strategy and battle tactics. Our results caution against sweeping interpretations based on archaeological contexts and preconceptions. They provide a new understanding of the Viking society, the social constructions and also norms in the Viking Age. The genetic and strontium data also show that the female warrior was mobile, a pattern that is implied in the historical sources, especially when it comes to the extended households of the elite. The female Viking warrior was part of a society that dominated 8th to 10th century northern Europe. Our results—that the high-status grave Bj 581 on Birka was the burial of a high ranking female Viking warrior—suggest that women, indeed, were able to be full members of male dominated spheres. Questions of biological sex, gender and social roles are complex and were so also in the Viking Age. This study shows how the combination of ancient genomics, isotope analyses and archaeology can contribute to the rewriting of our understanding of social organization concerning gender, mobility and occupation patterns in past societies.

A lady Viking! Adjust your preconceptions, and your fantasy novels and movies, accordingly.