Sheriff David Clarke is fond of wearing a flashy uniform, with lots of badges and crap splattered all over it. A man with military experience analyzes the stuff — it’s all meaningless garbage. I don’t think you can exactly call it “stolen valor”, though, since it’s not actually copies of anything militarily meaningful. 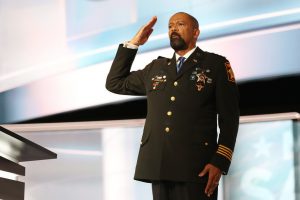 He never served in the military, either.

And guess what? I don’t think he’s a cowboy.

Fake all the way through. No wonder Trump likes him — they’re kindred spirits.

A nicely done critique of Murray and Harris » « What is best in life?