While our congress pats itself on its fanatical dedication to gutting health care, women are dying. This is a chart of maternal mortality in pregnancy per 100,000 live births. 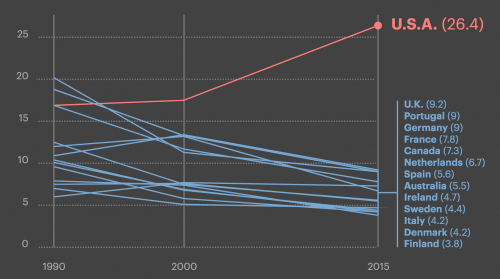 Our health care system, among many other things, is broken. It is not the will of God or manifest destiny or any kind of positive American exceptionalism, because as the chart clearly shows, other countries do not have this problem to the same degree we have, and while they’re working to improve public health, we’re doing our damnedest to worsen it.

Thanks, regressive Republican vermin. You’re all traitors to humanity as well as to your country.

When you feel all alone in your cynicism and despair, there’s always McSweeney’s » « Perfectly innocuous, mundane video inspires hyperbole on the internet