I grew up in Kent, Washington (so did my wife). That was long after this photo, though: 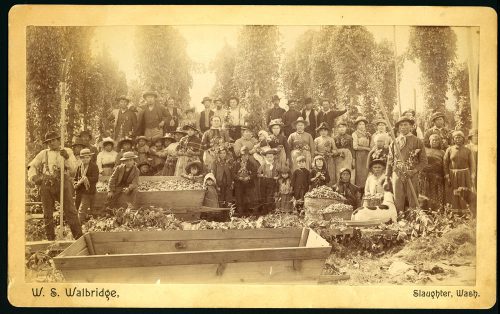 It was named for the region in England where hops were grown because, again before I was born, hops were the primary agricultural product around there. What I find fascinating, though, are the vestiges. The article names some of the early pioneers in that area — Ezra Meeker, Everett Titus — and I lived on Titus street, and the central business district was on Meeker. And that practice left a mark on the economy of the town.

The legacy of hops continues today, even though the Kent Valley is no longer farmland. When produce and dairy farming went away, existing railroad networks and flat farmland helped Kent scale up as a center of manufacturing and warehousing.

“We really built an infrastructure that even after hops left has become fertile ground for industry, for manufacturing, for warehousing,” Garfield said.

Yeah. I detested Kent when I was growing up. Warehouses. I lived through a transition, when the city was taking everything that was lovely and green and pleasant about the place, covering it with asphalt, and putting up warehouses all along the river, with the bonus of tearing down businesses to build more gas stations for the commuter population. Kent was a desert for human beings for a long, long time. I hear it has improved since then, but it couldn’t help bet get better.

The Prestigious Robes of Science! » « I watched American Gods, and I liked it!