There once was a kickstarter that raised half a million dollars with the idea of genetically modifying trees to glow in the dark, thereby replacing the need for street lights. It failed. I’m not surprised. They are citing technical difficulties in getting the needed genes inserted (it looks like they were using the luciferase reaction, which is the enzyme used by fireflies). 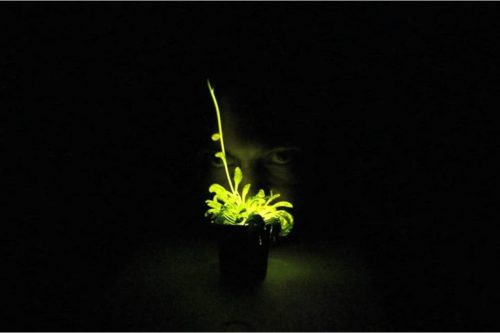 To get the plant to glow well, the research team had to insert six genes. But they never could get all six in at once. At best, some plants glowed very dimly. (The photo above of the glowing plant is a long exposure, making it appear much brighter than it actually is.) Evans says that he realizes now trying to insert six genes into a complex organism like a plant—rather than single-celled bacteria or yeast—was premature.

That’s why TAXA, the company that Evans set up to work on glowing plants, eventually pivoted to creating genetically modified moss that smells like patchouli to subsidize continuing glowing-plant research. Moss is a simpler organism. They got the scented moss growing, but the last bunch was contaminated and could not be shipped to customers. Without the moss, there was no way to keep funding the company. That’s when Evans realized that glowing plants weren’t happening.

I don’t even…yes, this is harder than the popular press sometimes makes it sound. Keep that in mind when you hear some transhumanist wackaloon speak blithely of modifying human genes to increase intelligence or longevity or whatever. The tools keep getting better, so maybe someday it’ll be easy to spritz in any number of genes into any organism we want, but the hard part is always going to be figuring out what genes do what we want, and don’t do what we don’t want.

That’s not what made me instantly doubt the project, though. It was wondering what fantasy world they were living in to think bioluminescence would have adequate output to come even close to the illumination we can produce with street lights. Consider the amount of light you can get from a jar of fireflies, if you’ve ever caught them; they’re pretty, but it really isn’t enough to read by, or to compete with a cheap flashlight. I’ve seen seas lit up with swarms of bioluminescent organisms, but even there it was only bright in contrast to the total darkness of the night. Right away I’m questioning how effective even a “tree” that was a solid cylinder of bioluminescent molecules would be.

Another problem: your tree cells are busy making light, like a collection of glow sticks inside…but they’re surrounded by bark. Trees aren’t transparent, you know, so only the thin outer layer of living cells will count for light production.

So just make the bark the glowing part, you say. Can’t. The outer layer of bark is dead, the luciferase reaction requires constant consumption of ATP and O2. This is an energy-intensive reaction, even if the enzyme is remarkably efficient at converting chemical energy into photons. So you’re basically trying to engineer a plant with an alternative pathway to compete with the Calvin cycle, subverting the whole process of absorbing photons to produce chemical energy to instead throw away that energy by emitting photons. And you’re simultaneously expecting the plant to grow into a massive tree.

You now may be thinking but wait — we’ve made glow-in-the-dark fish, and you can buy them for five bucks down at the pet store. That’s a whole different process. Glofish don’t make light, and don’t require internal energy to produce photons. They absorb light and re-emit it at a different wavelength, causing a color shift, a process called fluorescence. I’ve worked with a lot of fluorescent molecules (and even with luciferase), and it takes some non-trivial optics to separate out the shifted color signal. That light is also faint — it takes further non-trivial electronics to amplify it into a useful signal.

The dodge of producing patchouli-scented moss is a transparent fake-out, too. Nothing about that solves any of the problems of introducing a complex and energetically expensive set of genes into a plant. It’s also remarkably pointless. There’s an herb, Pogostemon, that grows naturally and already produces the scent, so why not just go with that? Also, I may have fond memories of patchouli perfume everywhere in the hippie culture of the 1970s, but there seems to be a lot of people who don’t care for it or its associations, so it’s an odd choice for a replacement. When I go to the store to buy a light bulb, I’m not going to be satisfied if the clerk “pivots” and sells me Axe body spray instead.

Bottom line: if you invested in this, you got taken.

Congratulations, Chuck Kimmel » « The President must be a zombie