I’ve always thought I was incredibly lucky to have such incredibly stupid enemies, but John @Scalzi has topped me. Scalzi has just come out with a new book, The Collapsing Empire. The guy who thinks he is Scalzi’s nemesis, Vox Day, has a small publishing house, and so he rushed into print a book, The Corroding Empire, to compete. Wait, you say, they just have similar titles, that’s not enough evidence to be plagiarism or an attempt to siphon off Scalzi’s sales, could it?

But then you see the covers. 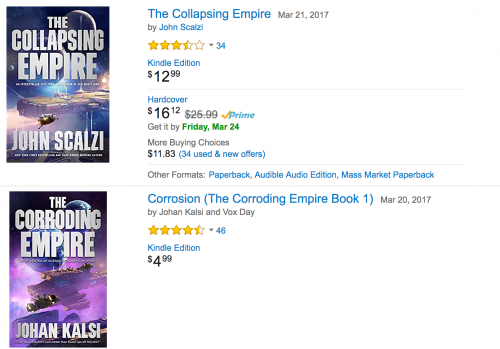 When Beale announced pre-orders for The Corroding Empire, he made his mission very clear: He wanted his publishing house to do better than Tor Books and thought outperforming Scalzi with a near-identical book cover would twist the knife, adding What would be more amusing than for The Corroding Empire to outsell and outrank The Collapsing Empire? Then again, Beale’s never shied away from promoting himself or his publishing house through controversial means, including getting his followers to nominate himself and several Castalia House books for Hugo Awards during the Rabid Puppies heyday.

Beale has since announced a reprint that shortens the title to Corrosion, and changes the author’s name to Harry Seldon, parodying a character from Foundation. Some of his followers have also responded by giving Scalzi’s book negative reviews on Amazon.