We just got back from the Indivisible meeting in Glenwood, and it was…interesting. There was a good crowd of 40 or 50 people, I think, and there were a few protesters with their big blue “Trump/Pence” signs, and they did something clever. There were a handful of them easily spotted because of their signs, but there were a bunch more that blended in with the attendees, so that when we went around the room introducing ourselves and explaining our interests, we’d have 3 or 4 people who’d talk about the environment, or hostile immigration policies, or health care, or LGBTQ rights, and then we’d hit some gomer salted into the audience who’d whine at us. I think they had 3 primary arguments, and they were: 3) I hate big government and taxes, 2) the authoritarian “he’s our president, so we have to support him no matter what”, and 1) JESUS and the decline of our morality. It was aggravating. The organizers, Jeannette and Glen, handled it just right, though. Here they are: 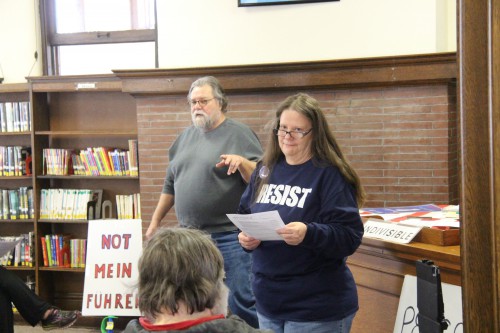 They let them speak! They got a minute or two, just like everyone else, and then they’d firmly insist on moving on to give the next person a chance. You can tell that chapped their hides, because at the end a couple of them demanded an opportunity to go on at greater length, and they just shut them down politely and insisted that we stick to the agenda. Good work. I was impressed. That’s how to get it done efficiently and get it done on time.

Then the meeting ended and, well, you know me. I’m a kook magnet. In the introduction I’d mentioned that I was a biologist, so a kook homed in on me afterwards. He thinks global warming is nothing to worry about.

So he told me he had a friend who was a submariner, and he said they sometimes got CO2 concentrations as high as 5,000ppm, (current CO2 concentration in the atmosphere is about 400ppm), and they were fine. The scientists don’t want you to know about that. To which I told him I’ve taught physiology, we go all over the partial pressure calculations, and we know that partial pressure of CO2 in the tissues easily gets around 40mm Hg, or about 60,000 ppm, so as long as you’re below that, you can offload metabolically produced CO2, although with decreasing efficiency, so yes we certainly do know all that basic stuff. Do you think the scientists and engineers who put people in submarines are unaware of the limits of tolerance to atmospheric gasses?

Besides, this isn’t about how much CO2 you can safely breath, it’s about the accumulation of greenhouse gasses causing global warming.

So he changed the topic. Of course. If you show the slightest sign that you know what you’re talking about, they flee.

Next, he asks me if I know what is in a can of Coke. I’m not sure where this is going, but I tell him flavorings, colorings, and carbonic/phosphoric acid. Yes, he announces triumphantly, and do you know what happens when you open a can of Coke? “It…fizzes?”, was my reply. Do you think the acid sinks to the bottom and forms a layer? NO! It escapes into the air! Ocean acidification is a lie! It can’t happen!

“Have you ever heard of the concept of equilibrium…”

Scientists are all liars! They’re idiots!

I’d had about enough of this raving nutcase. So I told him we were done with this conversation, good bye, move along. I was trying to follow the example of our organizers, but no, it wasn’t enough.

The Coke can makes it obvious! Scientists are all lying to us!

So I just told him, firmly to fuck off. It took a couple of tries before he did, finally, wander away.

These goons really have no idea of what boundaries are, let alone science.

Jeez, I know where that happened » « Never, ever threaten a librarian