Everyone has been telling me that they saw my face on Rachel Maddow’s show, but what’s more interesting are all the other faces. I haven’t seen the show myself (we don’t get MSNBC on our local cable), but I’ve been sent the screen cap: 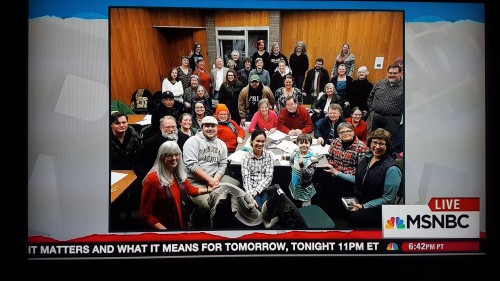 That’s our local Indivisible group which met for the first time earlier this week. The meeting was held at the public library, not on campus, and while there’s a healthy leavening of university faculty and staff, there was also a solid turnout from community people who are already thoroughly disgusted with the Trumpian regime. We’re already making plans to throw the rascals out. Keep that in mind when “flyover country” is dismissed as a uniform red mass.

You should read the Indivisible guide — it’s full of good advice to keep the pressure on our representatives in congress.

Friday Cephalopod: Looking for love » « Science, we have a systemic problem