A reader has warned me that I might be guilty of the sin of prophecy. Back in 2014 I wrote this:

And then they pointed out the results of this Gallup poll from the summer: 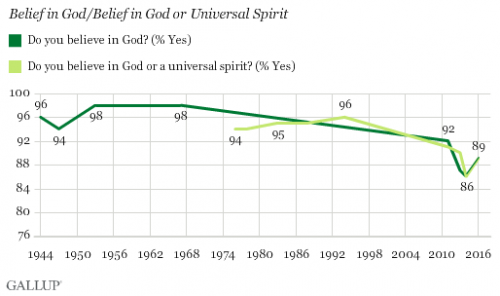 Nope. Not going to claim I’ve been sadly vindicated yet. As the article from Gallup points out, there’s a lot of wobbliness due to the precise wording of the question. I’d also suggest that the previous year’s abrupt downswing in religiosity looks more like noise, so this year’s upswing is nothing but regression to the mean. There are still signs of a slow trend away from belief in gods, but it’s nothing dramatic, and we’re not seeing widespread acceptance of overt atheism. As the article explains, the variations may not be meaningful of any kind of shift in ideas.

The exact meaning of these shifts is unclear. Although the results can be taken at face value in showing that fewer Americans believe in God than did so in the past, it is also possible that basic beliefs have not changed — but rather Americans’ willingness to express nonreligious sentiments to an interviewer has. Whatever the explanation for these changes over time, the most recent findings show that the substantial majority of Americans continue to give a positive response when asked about their belief in God.

I’m still going to argue that atheism needs something more than a denial of the existence of gods if it is going to achieve wider popularity. We’re riding on a slow swell of anti-clericism, but we need to get into the curl of a more active social relevancy.

We also can’t deny that we hold a minority view. But the “good” news is that the resurgence of Republican theocratic meddling might yet inspire more anti-religious views!

We growed a little more » « Another one down!