We hear a lot about how awful the year 2016 has been…but have the obituaries actually been that frequent? Greg Laden compares the number of celebrity deaths this year vs. other years, and the answer is no. Which is actually what I expected — there is no causal mechanism and no selective agent making a particular year more lethal than other years. 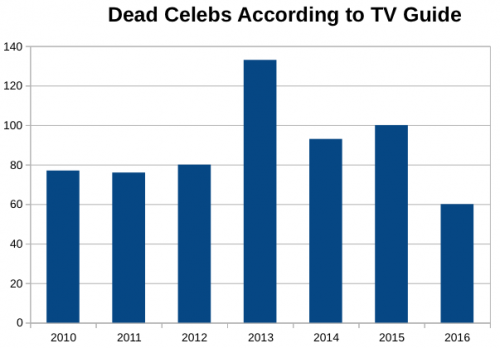 Now if we’d had a global war, a civil war, a plague, and a collapse of society (wait until 2017 for those!), then we’d have a reason to expect a surfeit of deaths. I wonder how Syrian celebrities are faring this year?

Otherwise, though, I think this was a self-fulfilling prophecy. All it takes is the death of a few celebrities, a little nudge of superstition, like the rule of threes, and soon enough people are doing all the work for you, gleaning every mention of a death and throwing them into the tidy category of “2016!”, and that reinforces the story. You can’t remember every celebrity who died, but you can remember “a lot of celebrities died in 2016”, and that becomes the memorable link.

Alternatively, all the people who sold their soul for fame and fortune are being recalled this year because the stony-faced guardian of the portal to Hollywood Hell, Abe Vigoda, died in January 2016, unleashing a swarm of vengeful demons.

Now be honest: Who remembered that Vigoda died early this year? How many of you are now adding his name to the tally of 2016 deaths, reaffirming the myth?

Why, yes, I would love to learn about what terrifying dystopian hell awaits us all » « Behind the scenes at the DNC