Let us turn now to the One True God of science and atheism, the Ground State of our existence. We shall now contemplate Caffeine. Raise your cup in praise. 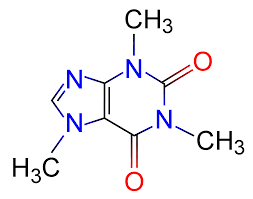 This morning, as I was sipping the blessed stimulant and browsing the journals, I learned a little something. I learned how caffeine evolved, and it was both unsurprising and surprising. I am not a biochemist, so it’s always enlightening to read a little out of that field. This, for instance, is the chemical precursor in the synthesis of caffeine. 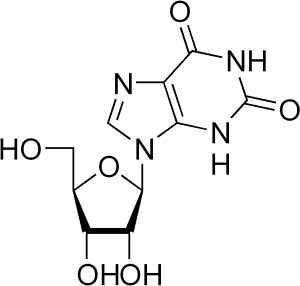 Oh, I said, I certainly do recognize that — I’ve been teaching budding cell biologists about important biological macromolecules for the past few weeks, and that’s a nucleoside. Note the ribose sugar with the attached nitrogenous base, the double ring of one pentagon attached to a hexagon? That’s xanthosine, which is also a precursor in the synthesis of those purines our cells use in signaling and assembling chains of nucleotides in DNA and RNA. That’s obvious. And then you look at caffeine, and it’s also obvious how cells make it: slap a couple of methyl groups (those -CH3s sprinkled around), and presto, you’ve got a happy drug. Easy.

Except…not all cells make significant amounts of caffeine. It takes specific enzymes to glue those methyl groups onto the core base with any reliable yield, and my cells might have xanthosine around, but they aren’t making any for me. I have to raid the vegetable kingdom and tear off their leaves and beans and hit them with boiling water to extract the blessed caffeine. And then not all plants make it — I can’t get a buzz on with a bowl of peas in the morning.

And then I learn that caffeine has evolved independently at least 5 times, and that the distribution of caffeine is patchy — some species in a genus will make it, while other related species in the same genus don’t. The caffeine molecule in Coffea (coffee) and Camellia (tea) and Theobroma is identical, but it’s synthesized by different pathways.

My mind is blown. Excuse me, but I have to take a break and think about this. I’m going to take a walk down to the coffee shop and gurgle down a couple of cups to help absorb this information. I’ll resume this post a little later.

You understand, don’t you? Go have another cup of coffee or tea while you’re waiting.

I have arrived at the coffee shop. 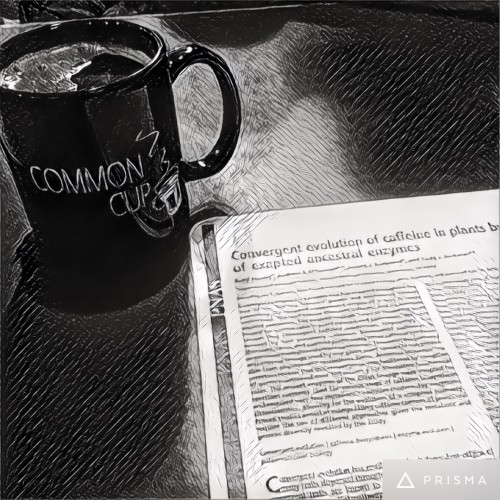 Must now worship reverently. Be back later.

The paper I’m reading is from PNAS, Convergent evolution of caffeine in plants by co-option of exapted ancestral enzymes, by Huang, O’Donnell, Barboline, and Barkman, and the title rather gives the story away. Here’s the abstract.

Convergent evolution is a process that has occurred throughout the tree of life, but the historical genetic and biochemical context promoting the repeated independent origins of a trait is rarely understood. The well-known stimulant caffeine, and its xanthine alkaloid precursors, has evolved multiple times in flowering plant history for various roles in plant defense and pollination. We have shown that convergent caffeine production, surprisingly, has evolved by two previously unknown biochemical pathways in chocolate, citrus, and guaraná plants using either caffeine synthase- or xanthine methyltransferase-like enzymes. However, the pathway and enzyme lineage used by any given plant species is not predictable from phylogenetic relatedness alone. Ancestral sequence resurrection reveals that this convergence was facilitated by co-option of genes maintained over 100 million y for alternative biochemical roles. The ancient enzymes of the Citrus lineage were exapted for reactions currently used for various steps of caffeine biosynthesis and required very few mutations to acquire modern-day enzymatic characteristics, allowing for the evolution of a complete pathway. Future studies aimed at manipulating caffeine content of plants will require the use of different approaches given the metabolic and genetic diversity revealed by this study.

So different plants have converged on synthesizing caffeine, using whatever enzymes they already had on hand, and by reconstructing ancient enzymes using the information in diverse modern sequences, they can uncover the actual steps taken to produce the modern, more efficient caffein production pathways.

Note that while I said it looks easy, just slap methyl groups on carbons in the rings, there are a lot of different ways that can happen. This diagram illustrates the great cloud of alternative intermediates — in the simplest sense, it’s a matter of the order that the three methyl groups are added. 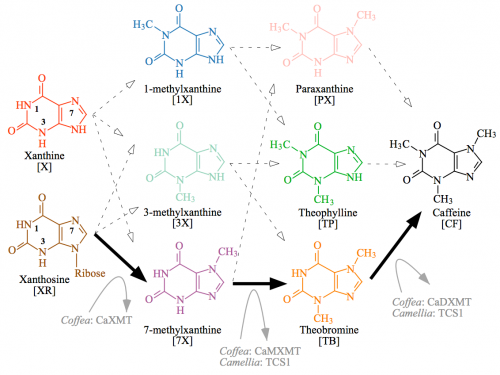 Caffeine biosynthetic network has 12 potential paths. The only path characterized from plants is shown by solid black arrows and involves sequential methylation of xanthosine at N-7, 7-methylxanthine at N-3, and theobromine at N-1 of the heterocyclic ring. Each methylation step is performed by a separate xanthine alkaloid methyltransferase in Coffea. In contrast, Camellia employs the distantly related caffeine synthase enzyme, TCS1, for both the second and third methylation steps, whereas the enzyme that catalyzes the first reaction remains uncharacterized. Other potential biochemical pathways to caffeine are shown by dashed arrows, but enzymes specialized for those conversions are unknown. Cleavage of ribose from 7-methylxanthosine is not shown, but may occur concomitantly with N-7 methylation of xanthosine. CF, caffeine; PX, paraxanthine; TB, theobromine; TP, theophylline; X, xanthine; 1X, 1-methylxanthine; 3X, 3-methylxanthine; 7X, 7-methylxanthine; XR, xanthosine

All of these intermediates can and will form naturally in the cell, but only the pathways that are facilitated by specific, effective enzymes will occur to a significant degree. So while methylation of nitrogens 1, 3, or 7 can occur in the first step, only 7-methylxanthine is produced because there is a specific enzyme, xanthine methyl transferase (XMT) that promotes that reaction.

In the second step, another methyl group is added to a different nitrogen, but different enzymes carry out this reaction in coffee (CaMXMT) and tea (TCS1).

Theobroma does it in a different order: the first step uses a CS1 enzyme to make 3-methylxanthine, and then a CS2 enzyme to convert 3-methylxanthine into theobromine in the second step. It’s madness! There are 12 different possible pathways to end up at the same final product, and it’s almost as if different plants plucked up different arbitrary enzymes to take a different path to caffeine.

One question, then, is where did all of these enzymes come from? After all, these are sequential pathways, and there’s no way to select for an enzyme to carry out the second step until an enzyme exists to carry out the first step, and there can be no selection for the first step in caffeine production until the whole pathway is present. This is the standard conundrum that utterly stumps creationists, and lead to the idea of irreducible complexity. How can you evolve a multistep pathway unless all the steps are selected for simultaneously?

And the answer is that all the steps use modified versions of other enzymes that carried out other functions in the cell. Plants maintained a methyl transferase for a 100 million years before the second step evolved because that primitive methyl transferase was facilitating other reactions in the cell, specifically in the methylation reactions needed for the production of benzoic and salicylic acid. And how do we know this? Because the investigators estimated the ancestral sequence of the enzyme from related species, made some of it, and discovered that it showed only weak activity in promoting methylation of xanthine, but much stronger activity with benzoic and salicylic acids.

The idea is that enzymes that performed one function had an incidental weak xanthine methyl transferase activity that generated enough 3-methylxanthine to act as a substrate for the second pathway to produce caffeine, which was sufficient activity to bootstrap selection for the whole sequence. The first enzyme could then be selected for increasing specificity for methylating xanthine to the point where the extant enzymes in some species are virtually completely specialized to produce 3-methylxanthine, and show negligible activity with benzoic or salicylic acid.

The answer, as I would have expected, is exaptation: a trait is coopted from one function to specialize it for another. It’s good to see another detailed molecular example of such an important idea, though.

It’s also good to see one of my favorite molecules showing up in multiple evolutionary trees. 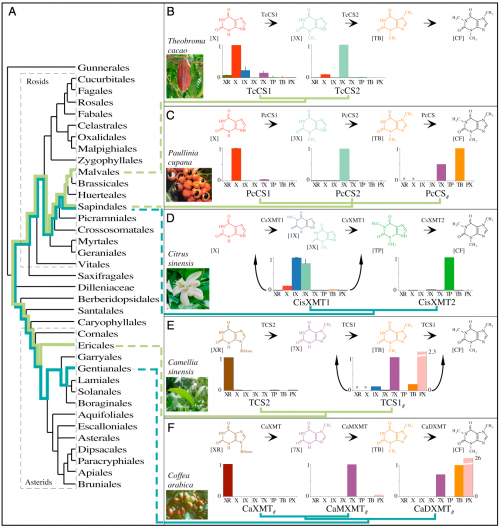 Caffeine has convergently evolved in five flowering plant species using different combinations of genes and pathways. (A) Phylogenetic relationships among orders of Rosids and Asterids show multiple origins of caffeine biosynthesis. Lime-green lineages trace the ancient CS lineage of enzymes that has been independently recruited for use in caffeine-accumulating tissues in Theobroma, Paullinia, and Camellia. Turquoise lineages trace the ancient XMT lineage that was independently recruited in Citrus and Coffea. (B and C) Theobroma and Paullinia have converged upon similar biosynthetic pathways catalyzed by CS-type enzymes. (D) Citrus has evolved a different pathway catalyzed by XMT-type enzymes, despite its close relationship to Paullinia. (E and F) Camellia and Coffea catalyze the same pathway using different enzymes. Proposed biochemical pathways are based on relative enzyme activities shown by corresponding bar charts that indicate mean relative activities (from 0 to 1) with eight xanthine alkaloid substrates. CisXMT1 and TCS1 catalyze more than one reaction in the proposed pathways. XMT and CS have recently and independently duplicated in each of the five lineages