I’m sure you’re all wondering what’s happening with Sergio Canavero and his dangerous and unethical plan to transplant whole heads. Three new papers have been published claiming to have achieved partial regeneration of function of severed spinal cords in mice and rats and dogs.

Credible scientists do not believe it.

However, papers published today detailing the spinal cord repair technique applied to the dog have prompted other scientists to express concerns over the work. “These papers do not support moving forward in humans,” says Jerry Silver, a neuroscientist at Case Western Reserve University in Ohio.

Jerry Silver is so nice. I’m more likely to say that these are cases of scientific fraud and that they are so shoddily done that they shouldn’t have been published. Of course, the way that they got published is that Canavero was the editor of all three who allowed them into the journal.

The “breakthrough” that they’re promoting is that after severing the cords, they tried some additional experimental treatments that were supposed to promote regrowth: they injected the site with polyethylene glycol (PEG) and with graphene ribbons. I’ve used PEG to make hybridomas — it’s basically a membrane solvent that allows adjacent cells to fuse with one another. The graphene ribbons act as electrical conductors to allow current to flow across the lesion.

I gawp in astonishment that anyone would think this would work, and that any ethical review board would allow them to continue. I should belatedly warn you that the New Scientist link includes a video of dogs and mice intentionally crippled and struggling to move.

Here’s the problem restated in cruder terms. This is a fancy cable with multiple insulated strands running through it — of course, it’s nowhere near as complicated as the human spinal cord. 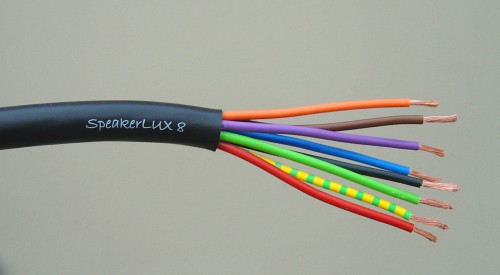 Now a friendly electrician tells you he can fix it easily. He’s not going to splice each wire together to restore the proper connections, instead, he has an easier solution: he’s going to inject acid into the cable to dissolve insulation and encourage the copper wires to fuse, and he’s going to fill the cable with an electrically conductive goop that will allow signals to cross the broken end.

Does this sound like it will work to you? These are generic treatments that completely ignore the specificity of the necessary connections. He’s just claiming that anything to promote fusion will work, and that the cables will somehow sort themselves out.

Would you let him reassemble your home theater system with this technique? He’s happy to show you videos of his work, with a television flickering and fading and speakers sputtering and wowing, all for verisimilitude’s sake, but he’s not actually able to show you that these botched repair jobs used these techniques.

You might ask for some quantitative measures of the success of his technique, and he tells you that it works maybe half the time, and that all of the controls, in which he just cut cables and plugged them together, burst into flames and exploded. (of his experimental mice, 5/8 showed some degree of improvement, 3/8 died, and all of his controls died, which is really suspicious right there).

In another experiment with rats, all but one of the experimental animals was accidentally killed in a flood, but that one showed great improvement. One. This is nothing but a dubious anecdote. How could it get published at all?

Somehow, though, this shabby work is getting funded, is passing review boards, and is getting published. And Canavero is planning to try it on a human subject.

Apparently, if you put on a white coat and have a medical degree, you can get away with torturing small animals before planning the torture-murder of a human being.