I read the transcript of Trump’s nomination acceptance speech. It was a grisly horror that painted a picture of an America that is a dystopian horror right now, which will be magically and instantaneously transformed on the very day he becomes president, and it was full of lies. The responses (and here’s a typical one) are all about how he twisted statistics dishonestly to make his rhetorical points.

I hate to say this, but the facts don’t matter. You can declare that unemployment rates are down, but those people who are out of work don’t care — and they’re the people Trump is yelling at. You can point out that he’s lying when he says crime is rising, but the people who have been mugged don’t care that they’re a statistic, and they’ll listen to Trump. Worse, people who haven’t been mugged will have been watching the crime stories on their local television station and Fox News, and have the perception that there is all kinds of lawlessness going on around them. Throwing national statistics at people who are counting one, two, many isn’t going to change their minds.

Furthermore, as Trump so ably demonstrates, all too often statistics are used not to identify a truth, but to justify a preconception. I was recently cooly informed that Muslims commit 98% of all terrorist attacks…never mind that the FBI has determined that 94% of all US terror attacks have been by non-Muslims. The guy is convinced that Islam is the source of all evil in the world, and he has a number that reassures him that his opinion is correct.

So here’s our terrifying problem: our little homegrown fascist is tapping into the fear and anxieties about their future of a significant number of people in the country. These fears are partly legitimate, and partly the product of a media that has been stoking them for years. You don’t reassure individuals by telling them that the average person is better off or that the trend lines are all rising — they don’t give a damn about averages when their problem is personal. In fact, waving tables of numbers and graphs at people to tell them their grievances are false is going to be more enraging than reassuring. And meanwhile, Trump will lie about the statistics and validate their gut feelings and pander to every prejudice they’ve got, and guess who they’re going to want to believe?

We’ll counter that by dumping a pile of actuarial tables on them. Yeah, that’ll work.

I’ll also point out that we’re seeing that policy doesn’t matter, either. For years, people have been voting against their own objective self-interest because demagogues have effectively whipped them into a froth of fear over religion, or guns, or abortion. See, for instance, Brownback’s Kansas. Progressive policies are almost always more appealing to the people, when presented without a label…but the media have effectively attached a lot of the hated positions to the Democrats (and rightly so — progressives should support women’s autonomy, minority rights, and oppose war and violence). Witness also Ivanka Trump’s bizarre speech at the RNC yesterday: she basically promoted the Democratic party platform and tried to attach it to her father. You can say he’ll do anything, and the disgruntled voters won’t care.

I see two strategies (I know there are more). The first necessary step is to recognize that the unhappy people who want Strong Man Trump to cure all their ills actually have legitimate problems — you cannot wave them away with a chart. So you can try to win them over by actually addressing their concerns, which would be ideal, except for the fact that one of their concerns is driven by raw, naked racism. Or you can simply write off that portion of the population as a regressive, deluded mess, and hope that the remainder are sufficiently numerous and motivated to vote, so you can get real political progress despite the unhappiness of that minority (which, if you’re a real progressive, you’ll then try to alleviate).

I think we should definitely be very afraid. The fascism is openly unmasked, and we’re facing a serious risk that it could be victorious in a few months. I dread waking up to newspapers that look like this. 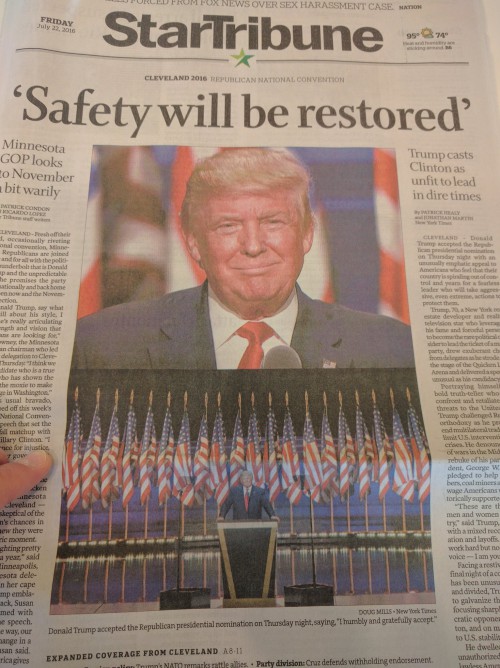 Oh, damn. I did. That’s the front page of the Minneapolis Star Tribune this morning, featuring Great Leader surrounded by flags. And this is my nightmare.