That’s the only positive spin I can put on the awful story of Brock Turner. For those who’ve missed out on the outrage, Brock Turner was a Stanford athlete who found a drunk woman passed out behind a dumpster, and he proceeded to do what any privileged male asshole would do: he raped her. He was caught in the act however, and tried to run away, and was put on trial.

Awful enough so far. But then once he was convicted, the judge decided to give him a light 6 month sentence, because prison would have a severe impact on him. Yes? Isn’t that the point? Of course, the judge, Aaron Persky, was also a former Stanford athlete, so this is clearly a case of a judge seeing someone who looks like him, so he must be a good boy…

So injustice is compounded. But then, just to make me truly sick to my stomach, Turner’s father made a statement. This is why I say fathers matter — because Dan A. Turner is an oblivious asshole who raised an asshole. This is appalling. 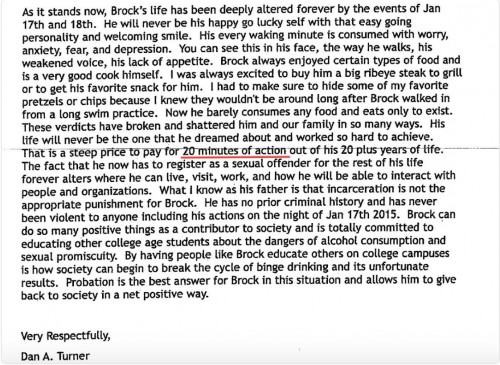 A rape is 20 minutes of action? Twenty minutes represents a prolonged, persistent assault. Please, the fact that he’s lost his appetite for steak and pretzels does not impress me. And it should not be the verdicts that have broken and shattered him and his family, it’s that your son is a goddamn rapist. Got that, Dan A. Turner? You raised a boy with so little respect for other human beings that instead of helping a person who was unconscious, he attacked her. Given what Turner has written, that’s no surprise. Maybe the Turner family needs a good shattering.

I’m also thinking that we don’t scale punishments by how long the crime takes to perpetrate. You can murder someone with a gun in a fraction of a second, so that means that kind of crime warrants what, a half-hour in prison?

The victim of this assault wrote her own statement. She indicts the media, where she learned the details:

And then, at the bottom of the article, after I learned about the graphic details of my own sexual assault, the article listed his swimming times. She was found breathing, unresponsive with her underwear six inches away from her bare stomach curled in fetal position. By the way, he’s really good at swimming. Throw in my mile time if that’s what we’re doing. I’m good at cooking, put that in there, I think the end is where you list your extracurriculars to cancel out all the sickening things that’ve happened.

She indicts the justice system:

I was pummeled with narrowed, pointed questions that dissected my personal life, love life, past life, family life, inane questions, accumulating trivial details to try and find an excuse for this guy who had me half naked before even bothering to ask for my name. After a physical assault, I was assaulted with questions designed to attack me, to say see, her facts don’t line up, she’s out of her mind, she’s practically an alcoholic, she probably wanted to hook up, he’s like an athlete right, they were both drunk, whatever, the hospital stuff she remembers is after the fact, why take it into account, Brock has a lot at stake so he’s having a really hard time right now.

And she really lets Brock Turner have it, at length.

Try contrasting it with Dan Turner’s statement. The two Turners ought to be curled up in shame.

As for the judge — there are multiple petitions to have Aaron Persky removed from the bench for undeniable bias. I don’t think petitions like this can accomplish much, but at least it sends a signal that his decision in this case was unjust.

If the #ReasonRally failed, why were so many people happy to have attended? » « Dictionary atheists are boring atheists