Have you ever had one of those nightmares where you show up for class, and the professor starts lecturing incomprehensibly about a subject you don’t understand, but everyone else in the class is nodding happily and taking notes, and then you look down and notice you forgot to put on pants this morning? Neither have I, but I’ve lived it. Except for the pants part.

I arrived late at the conference — my wife is shopping for our trip to Korea, and so I got to play the part of the disconsolate husband sitting around in the Mall of America for a few hours. I’m not complaining, it was more fun than watching people make excuses for the paranormal. My plan had been to get there and get my double-dose of ufology that afternoon. It didn’t work out that way, because as usual, everything at the conference was running late. I was off by about an hour. So instead, I got to listen to Laird Scranton. Look him up on youtube — really, he’s hilarious, even though he doesn’t know it.

He pretends to be a scholar of language, when actually he’s a skilled practitioner of the art of false etymology: he takes a word in one language, finds that it sounds sort of like this other, unrelated word in a different language, and then builds a weird rationale for the connection. In this talk, he’s describing Skara Brae, an old neolithic settlement in the Orkney Islands. His usual wheelhouse is the pseudo-archaeology of the Dogon people in Africa; the Dogon are very popular among the Ancient Aliens crowd, because apparently (who knows how much of this is garbled wishful thinking) they have a myth about being visited by frog people from Sirius, and have “advanced astronomical knowledge“, although it seems that their ‘knowledge’ was actually cobbled up by unscrupulous Western con artists, and their culture is being co-opted to prop up pseudohistorical bullshit by a swarm of Ancient Aliens weirdos.

So what does this have to do with islands in the far north of Scotland? Everything is connected! Scranton is looking at the floor plans of four or five room houses of the Dogon people, and the floor plans of the four or five room houses at Skara Brae, and…OMG, they’re similar. Therefore, neolithic people living in the Orkney and Faroe islands must have had a culture just like that of Africans living in Mali. Furthermore, the Dogon are in Africa, just like the Egyptians, so the Dogon and Egyptian languages must be closely related, and since their houses have similar layouts, the Orkney islanders must speak a dialect of ancient Egyptian.

Do you find this logic credible so far?

And then Scranton starts examining the languages. Hold on to your hats, people, this will shake you to the core: the Faroe islands? Yes? Now note: Pharoah. These must be the islands of the pharoahs!

He went on and on finding similar correspondences. “Ness”, the word for “lake”, actually means “tongue” in Egyptian. When you translate “Skara Brae” with an Egyptian dictionary, it means “Capsized Boat”. Etc., etc., etc. For a minute, I thought he was going to make a case for the Scots being a lost tribe of Egyptians, but silly me, that would be absurd and insufficiently racist. He instead tried to argue that Egypt was founded by people from the Faroe Islands.

One of the early pharoahs, from the 4th dynasty, was named Sneferu, which obviously translates to “From the Faroe Islands” when you translate it ‘properly’. Furthermore, there were three pyramids built during his reign, and when you compare them to the rough hills of the Faroe Islands, they look exactly (for a Scrantonish version of “exactly”) alike. Also, when you look at the Egyptian hieroglyphics describing their ideal of heaven, they talk about a “field of reeds” — the Faroe Islands have marshes with reeds! — and the stylized animals in the glyphs kinda sorta look like the animals on the Faroes. Therefore, the Egyptians were transplants from the Orkneys/Faroes, pining away for the island hills, who regarded life on the Faroes as a kind of paradise.

I’m sitting there gawping in disbelief, but the audience was eating this up with a spoon. I just wanted to stand up and shout, “HAVE YOU ALL GONE MAD?”, but I restrained myself. Although I did regret my self-restraint when he proudly bragged in the Q&A that he has no problem translating modern Chinese using his handy Dogon/Egyptian dictionaries. I’m sure he can, but does it make sense when he does?

You will also be happy to know that he’s now at work trying to use modern astronomy and his understanding of ancient mythology to revive the corpse of Velikovsky.

OK, so Scranton was unbelievable and ridiculous, but at least it was entertainment of a sort. I was there because I don’t pay much attention to UFOlogy, so it was an opportunity to learn what is going on in the heads of the saucer-nuts. I would learn, unfortunately, that UFOlogy is easily the most fucking boring subject ever. It was going to be a long hour of me squirming in my seat trying to pay attention to the speaker, and eventually failing and nodding off. Good god, but UFOlogy is tedious and banal.

The speaker was Peter Robbins, who announced that he was going to tell us about a British incident that he considered the very best evidence for UFOs ever. Unfortunately, he didn’t start his talk by giving a summary of the event, or what his evidence was going to be, or even telling us the name of the incident, so for those of us (solely like me, that is) who don’t have a clue about famous UFO stories, it all started as a fog of words with no referents. Well, except one: he said this was like the British Roswell. I know about Roswell, at least. So it’s going to be a lot of bloated noise about a trivial incident?

He started by telling us about these two RAF bases, Bentwaters, now decommissioned, and its sister base, Woodbridge. He showed us photos of runways. He explained that this was an area with a lot of pre-Christian influence and Wiccans, which drew a pleased gasp from the audience.

There was a big storm in the fall of 1980 which knocked over over a million trees. It was not natural. What? How do you know? What does it have to do with anything?

He tells us an anecdote about seeing an SR71 fly overhead. B2 bombers flew out of Woodbridge. He’s got photos of all these things. Then he tells us that in 1980, there was a lot of unrest in Poland. He shows us photos of Lech Walesa. Of the Gdansk shipyards. Map of Poland.

I’m sitting there wondering, “What the fuck…?” He’s just going on and on about these irrelevant and ultimately mundane details without talking at all about the “incident” he’s supposed to be dazzling us with. It sinks in later that this is his modus operandi.

Later, he starts talking about his primary witness to “the incident”, a guy named Larry Warren, who is going to be just full of fantastic bullshit. And what does Robbins do, for example? He shows a photo of a truck in a parking lot, and tells us that “this truck, or one just like it, was used to drive Larry Warren to the site”.

It was obvious what he was doing. He’s trying hard to pretend that he’s a meticulous, neutral reporter who has bucketloads of evidence for everything he’s going to claim. He is boring his audience to tears to overwhelm them with extraneous detail so they’ll welcome his ultimate pronouncement of alien phenomena with gratitude. It didn’t work on me. My notes are full of comments like “GET TO THE FUCKING POINT” and notes about the time — he babbled for half an hour before even giving me a clue what he was going to talk about. There is lots of profanity I have mostly removed from this summary.

So what was he going on about? It’s called the Rendlesham Forest incident. It’s all built around claims by one guy, Larry Warren, that he was transported by the air force to guard a grounded UFO in a field, and that he saw three 3-foot tall aliens hovering around it.

Of course, at this point there are no photographs. Just “artists’ renderings” and sketches by Warren. When it comes to documenting anything, Robbins has a photo of a letter Warren wrote to his mother in the US, stating that he saw a UFO, but can’t say more because the military would censor it. Then there are even more incredible claims of taking an elevator down to a giant cavern below the base, with little triangular UFOs and tiny aliens everywhere. Again, nothing but the ravings of Warren support any of this.

It was telling that even the stuff that ought to have been confirmable weren’t. Robbins claims that UFOs were flying around the base, hovering over weapons bunkers, and shining beams down that Robbins said “adversely affected the ordnance”, whatever that means. Somebody in the audience actually asked Robbins for details on what the adverse affects were, and he smugly told everyone that obviously it didn’t trigger the tactical nuclear bombs stored there, so it was something else.

This is the “very best evidence for UFOs ever”? Really? I am underwhelmed. This is even less convincing than the balsa wood and mylar recovered from Roswell. It was also the most boring, unpersuasive, digressive, conglomeration of irrelevant anecdotes I’ve ever heard. No wonder UFOlogy is dying out if this is the best they can muster.

I know I said I was going to listen to the notorious Travis Walton, too, but at that point I’d seen enough. UFOs are deadly dull. I couldn’t sit through another wearisome, unconvincing litany of mundane events wrapped around an incredible and totally undocumented tale of little green men. So I left. I don’t think I ever need to hear another UFO story for as long as I live. Another one might actually kill me with exasperation.

So today I think I’ll go in and listen to Scott Wolter, the archaeological fraud behind America Unearthed, the cable series on the History Channel’s H2 network. You know, the channel where they air the stuff that’s too embarrassing to be shown on their main channel. He’s kind of angrily demented, so at least I won’t fall asleep in his talk. 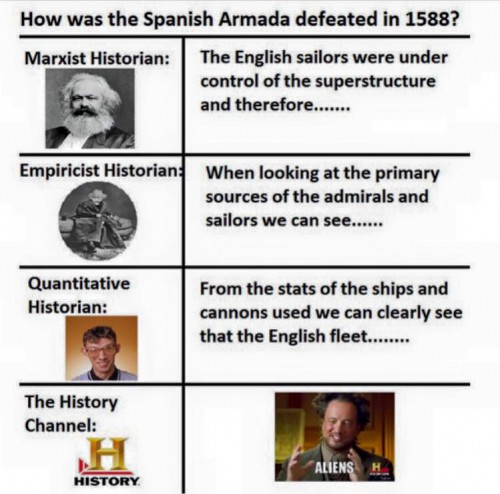 Sometimes, our musical preferences say absolutely nothing about our views » « UFOs coming right up