The university has accepted the Ph.D. dissertation of Judy Wilyman, which is plum full of rancid bollocks. She’s an anti-vaxxer, and apparently her advisor had no problems with a thesis that basically lied about the science and promoted bizarre conspiracy theories. 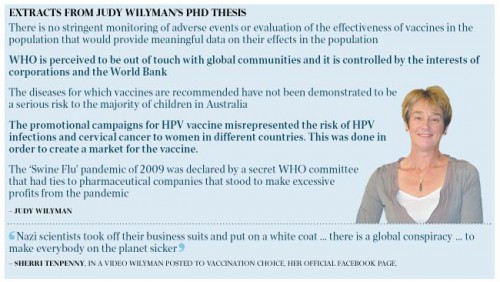 Look at that first line. There is no stringent monitoring of adverse events or evaluation of the effectiveness of vaccines in the population that would provide meaningful data on their effects in the population. Has she never heard of this science called epidemiology? Does she know what a Phase IV clinical trial is? This stuff is assessed out the wazoo. It’s the analysis of effectiveness and side effects that allows doctors to recommend dosages and schedules.

But it seems the social sciences department at UOW doesn’t believe in statistics or science at all. And most appallingly, the university is supporting this crap.

UOW ensures research is undertaken according to strict ethical and quality standards and supports researchers’ academic freedom of thought and expression, he said.

UOW does not restrict the subjects into which research may be undertaken just because they involve public controversy or because individuals or groups oppose the topic or the findings.

I can believe they have quality standards, but this is an admission that those standards are disgracefully low.

I would agree that research shouldn’t be restricted because it’s controversial. That’s not the case here. The problem with Wilyman’s research is that it is wrong, and that it violates the apparently non-existent standards at UOW for truth and accuracy.