This comic is not funny. 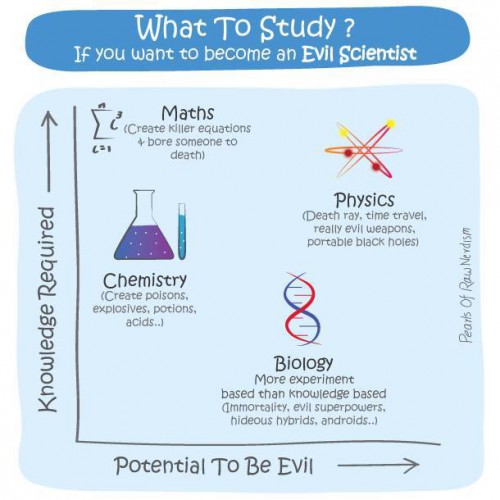 It’s totally wrong. It’s from the Ernest Rutherford school of science stereotypes. Biology involves “less knowledge”, however that is defined, than physics? Nonsense. Ask my students. There’s constant tension in my classes between understanding the general principles and mastering all the details, and both are hard. Biology needs to be moved upward, above physics, on this graph.

As for the potential for evil…I’m sorry, there’s no comparison. Physics specializes in the spectacularly abrupt termination: bullets, bombs, lasers, “Mr Bond, I want you to die!” sorts of things. Biology is all about the slow, lingering, agonizing death that is simultaneously a mechanism for transmission to others; biology turns people into walking engines of death. And cancer! What’s more evil than cancer? Nothing, I tell you. So the cartoonist really needs to move biology way, way out to the right.

It vexes me that physicists are always brainwashing their students into thinking biology is less evil than they are.

In our apocalyptic zombie wasteland of the future, there will be no zombies » « Axon guidance mechanisms are thoroughly evolutionary in origin