Minneapolis/St Paul are good cities and good places to live. This state was largely occupied by German Catholics and Scandinavian Lutherans, so it may be 80% white, but they also have increasingly diverse populations, with rising numbers of African Americans and Hmong and Somali people — it’s a city where a Muslim, Keith Ellison, can get elected to congress, and that, as the largest by far population center in the state can get a fairly liberal state legislature elected. Hey, Prince lives there!

The rest of the state…well, I can say that the people are generally laid back and well intentioned, and friendly as all heck. Lake Wobegone isn’t a total misrepresentation. But it’s also poorer and much more conservative.

This is Minnesota’s 6th congressional district. 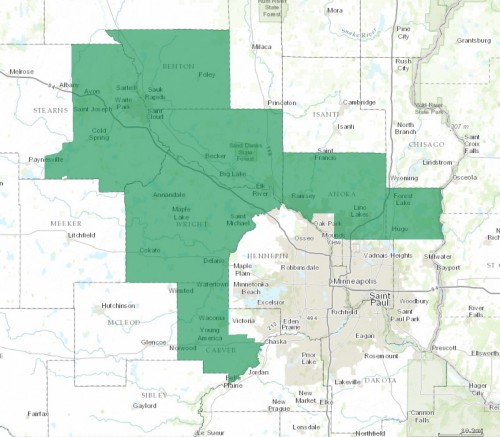 You might think it looks a bit like a frog leaping away from Minneapolis, that ball between its legs. I see it more as a stunted, lumpy, slug-like blob with massive jaws closing around the city, but I’m biased. This is the gerrymandered product of Republican social engineering, a collection of suburban and rural areas amalgamated into a xenophobic monstrosity that reliably produces the most insanely reactionary politicians in the state, and elects them.

This is Bachmann country. It’s 96% white, and they like it that way. It also has a lot of cities named after saints — that German Catholic heritage — and there’s a fair bit of godly sanctimony lurking there (again, Lake Wobegone isn’t far off the mark in that regard).

I live west of the 6th district. You see that line running down the center of the blob, from west to east? That’s I94. When I drive to Minneapolis, as I do, I basically enter the cloaca of the beast and crawl up its alimentary canal to be vomited forth from its gaping maw, thus arriving in the Twin Cities. I can visibly sense the transition into the 6th district on my drive.

Outside, it’s all corn fields, endless rows of fenceposts, and the occasional non-commercial billboard, mostly featuring Jesus or smiling babies begging you not to abort them. Those continue sporadically as I wend my way to the big city, but round about the time I get to Avon, there in the rectum of the 6th district, I see the bitter, angry signs: they really hate Obama there. That’s where I first encounter signs telling me that atheists are all going to burn in hell. It’s John Birch country: US out of UN! But it’s not all hate. They also really love the military.

Bachmann, at least, is gone. She’s been replaced by Tom Emmer, who is less flamboyant but just as wretchedly awful. Emmer is against abortion, taxes, and same sex marriage. He wants to pass a state sovereignty bill that would allow states to ignore federal laws. He doesn’t want to oppose bullying of gay and transgender people in the schools. He suspects that servers in restaurants are making hundreds of thousands of dollars in tips, and thinks the restaurant owners ought to be able to deduct tips from wages. He is a perfect representative for the 6th district.

He also voted for HR 4038, the American Security Against Foreign Enemies Act.

Never mind the fear-mongering title; HR 4038 is the act that refuses desperate Syrian and Iraqi refugees entry into the US. It is the product of shitting-their-pants cowardice. If you want to understand US foreign policy, this is it: we are terrified of ‘foreigners’, so we build up a massive military that lets us bully everyone else, but when battered, fearful men, women, and children knock on our door and ask for mercy and understanding, we blubber in fear and add extra locks.

It’s not just Republicans, or the 6th district, either. Three Minnesota Democrats voted for fear. My own representative, Collin Peterson, voted for greater cowardice, too. He’s a Democrat, sort of, one of many who voted for xenophobia. He mainly panders to agricultural interests while opposing women’s choices — I’ve never voted for him. Every time I’ve seen his name on a ballot his opponents have been even worse, though, so I end up not voting for any representative for the 7th district. Goddamn Blue Dogs.

So this is where we stand. We are happy to bomb foreign countries, wreck their economies, and destroy their infrastructure, all while deluding ourselves into believing they will love us for Democracy! Whisky! Sexy!. But when the civilians crawl out of the rubble and ask for help, we turn our back and call them terrorists.

America, home of the craven.

We should be ashamed.

I know what I’m doing tonight » « Are students waking up?