You can read this new paper in Current Biology titled The Negative Association between Religiousness and Children’s Altruism across the World and see for yourself — religiosity is not a good thing for fostering generosity, it seems. The authors are a truly international group who tested children from Canada, China, Jordan, Turkey, USA, and South Africa with a set of games, and got a set of results that showed a statistically significant difference in the degree of altruism for different religions, or lack thereof. Here’s how the results look: 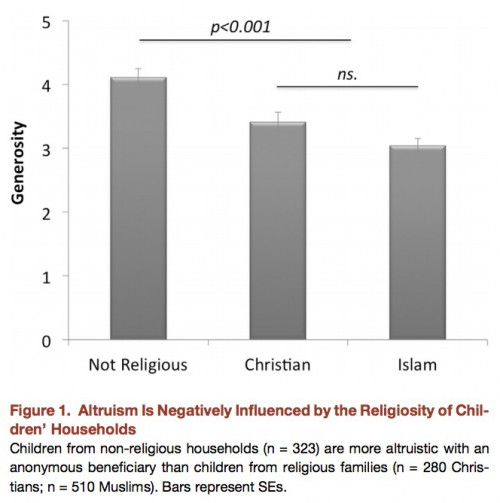 I have some quibbles, though. Testing in a classroom with games may not be the best measure of how people deal with one another in real-life situations; maybe godless kids take the abstractions of a game more seriously. Although the authors say they analyzed the data for different parameters and only the religious factor popped out as significant, a lot of the behavior of these groups is going to be correlated with multiple factors: a Muslim child in Chicago might feel more oppressed than a Muslim child in Turkey, so there’s opportunities for all kinds of bias to creep in. There’s virtually no breakdown of the distribution of religion with locale in the paper: we’re told how many Christian, Muslim, and atheist children were tested, but nothing about the geographic proportions of each. But the take-home message from this paper is clear, and I’m just naturally suspicious of results that so neatly confirm my biases.

They also argue that their statistics rule out certain alternative explanations for the differences.

Here, we show that religiosity, as indexed by three different measures, is not associated with increased altruism in young children. Our findings robustly demonstrate that children from households identifying as either of the two major world religions (Christianity and Islam) were less altruistic than children from non-religious households. Moreover, the negative relation between religiousness and spirituality and altruism changes across age, with those children with longer experience of religion in the household exhibiting the greatest negative relations. Of additional note is that the sharing of resources was with an anonymous child beneficiary from the same school and similar ethnic group. Therefore, this result cannot be simply explained by in-group versus out-group biases that are known to change children’s cooperative behaviors from an early age, nor by the known fact that religious people tend to be more altruistic toward individuals from their in-group.

Except that in some places, you might have a reasonable expectation about whether a random, anonymous person would be a member of your in-group.

With some reservations, though, I guess I shouldn’t trust the religious kids to share their stickers with me. But wait! This knowledge would make me less altruistic if I were playing a game with a population I suspected to be largely Christian or Muslim. So would reading this paper first modify the behavior of atheists in America? Oh, man, psychology studies make my brain hurt.