Maki Naro has done something very clever: he has created a generic comic that we can use over and over again every time a Famous Scientist does something bad. 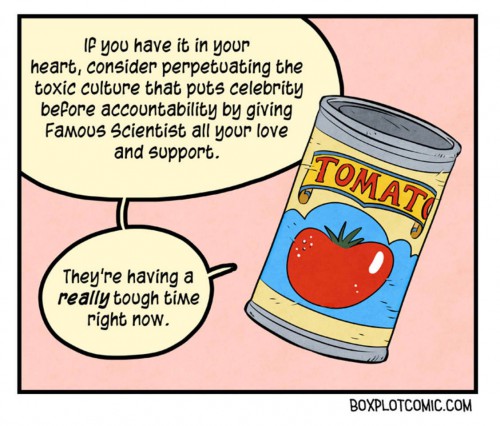 Read the whole thing. Every panel encapsulates perfectly the standard reaction we always get.

In other, related news, UC Berkeley announces that they did too do enough.

The university has imposed real consequences on Professor Geoff Marcy by establishing a zero-tolerance policy regarding future behavior and by stripping him of the procedural protections that all other faculty members enjoy before he can be subject to discipline up to and including termination, the university said in a statement Monday.

Right. Over a decade of bad behavior that affected multiple women and generated multiple complaints, and now their response is to say One more time, and you’re really gonna get it!.

I am also unhappy that their solution is to strip him of “procedural protections that all other faculty members enjoy”. That’s not right. He should have a reasonable defense against future accusations; I also don’t believe the university, because from their current procedures, their default is always to doubt the accuser’s claim. They aren’t suddenly going to change their mode to disciplining a professor if a student says anything.

Besides, he was already wrung through their “procedures”, and found to be in the wrong. He ought to be disciplined for what he has done, and what has been determined by their process.

The Democrats are easy, at least » « It was all China’s fault